Hanging on to your sanity

My dad is not going into oblivion without a fight.
He is 94 and still goes to work most days.
He sits in his office and does "stuff" with salesbooks and endless charts of numbers on white copy paper.
We have been trying to figure out what goes on in his mind. He can't explain it but he wants "something."
He emerges at coffee time (10 a.m and 3 p.m.) and usually doesn't say much. But he follows the conversation and contributes when necessary.
Yesterday he asked me for help.
He has been counting.
He made a grid on plain white paper.
He started numbering in the first column 21-30, the next column was 1-10, the next was 31-30.
He was stuck on what comes after 35.
Also, would the square at the bottom be 40?
If so, then would the top of the next column be 41 or 51? And how do you write 51?
It took some deciphering to figure out the simple pattern. The column of 1-10 seemed to be out of order but I think he just started to far from the edge of the paper and went from right to left instead of left to right.
He seems to have a plan to count by "10's" using this grid.  I think there is more to the grid than what we understand. Perhaps some pre-calculator multiplication trick.
Anyway, I got him on the right track.
Several farmers appeared and I stuck around the store.
One is the last of three brothers and I very rarely see him. I didn't really get any good stories but he wanted to talk about my no-till project for his nephew which worked quite well. We also talked about his neighbor rebuilding a bridge. He helped the fellow's father build the bridge and they thought it was going to last forever. I suppose the 21st century seemed pretty far away in 1950 or 1960.
Dad appeared again. He had forgotten what came after 56. We went over the grid again.
I went back to work.
Near dusk, another neighbor appeared and wanted advice on a rotating goose scarecrow in the shape of a giant eagle.
Dad needed to know what came after 99. He had made a new chart.
Then the owner of the local truck shop appeared.
He thinks we should buy a mid 1970's kenworth with an 8V71 Detroit, 250" wheelbase, 13speed, Eaton two speed rear axles, walking beam suspension, new tires and good paint.
I have no idea what many of those words mean. I just smiled and nodded.
Dad appeared, "What comes after 110 and how do you write it."
And so it goes...
I went out and stared at the G1355 for a while.
I'm starting to see a pattern. 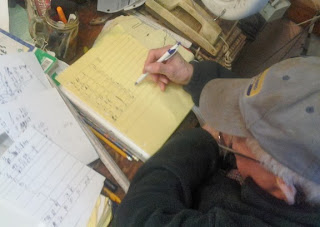 Posted by buddeshepherd at 7:54 AM