Drinking beer and listening to Tom T. Hall and I think I made a catfood omlette

My wife and daughter are gone. I think they went camping. It could be that they have a completely different life. Perhaps they have a whole other family with a father that doesn't work all the time and has lots of money and they only hang out here so that they can appreciate their real life of luxury.
Be that as it may, I was left with many helpful instructions on what to eat and what to feed the cats.
Which I promptly forgot...
A snapshot of what goes through my brain... Straw, stacking, straw, baling, crisis, where is Bill?, straw, pretty bird!, straw, BOOBIES!, straw, wife, mmmm pie!, Oh I like pie! and cookies and ice cream, I would like some pie, and cookies, mmm chocolate chips, oh crap what did she say?, daughter, daughter, straw, baling, stacking, straw, I hate straw, I hate baling, I hate stacking, oh my daughters kitten is soooo cute, straw, old country western music, straw... Where's my coffee cup?
Anyway...
My daughter bought me a six pack of beer. That was very nice of her. It was my favorite brand of Henry's.
I usually get my wife to write down the instructions as I like the little smiley faces and sometimes she draws pictures.
I also was determine to either eat all the food or feed it to the dog so that she doesn't worry about me forgetting to eat.
I swear she said the dish in the refrigerator was salmon. I'm a little nervous about eating radioactive fish but since I'm already eating radioactive ice cream I guess it doesn't really matter.
I kind of slept in this morning.
I have not really been feeling in top form this summer. I'm not really sure why. I suppose it is the general depression that seems to infected every person who has to work for a living and figures those who are in charge of world affairs are either idiots or evil or both. Which pretty much accounts for the opinions of every one I know.
I wandered into the "den" to find a suitable album. I found a whole collection of Tom T. Hall which I had forgot I had purchased in a moment of poor judgement. Four albums for one song? Of course that was not as bad as when I bought the three worst albums by the Kinks when I only wanted "Schoolboys in Disgrace."
But I digress...
After four cups of coffee I decided I should have breakfast.
I put on another Tom T. Hall album and cracked a beer. 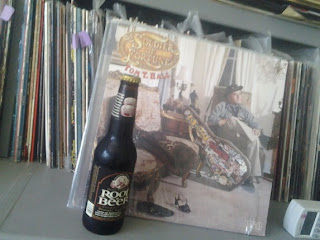 My friend D. texted me about going to Antique Powerland but I don't really know what to do if I don't have my daughter and so I tend not to leave my house.
I rummaged for food. I really wished for that list and the smiley faces.
I spied a dish which looked like salmon. I know my wife said something about making an omelette. She has learned to capitalize on my focus on certain things which interest me. (See the book, "On the Tip of My Tongue," by Iles Brody)
So I got out a carton of eggs and a few green onions. I couldn't find any mushrooms and forgot there was bacon in the freezer.
I put a generous helping of butter in the teflon pan and threw in the onions and the salmon looking fish. 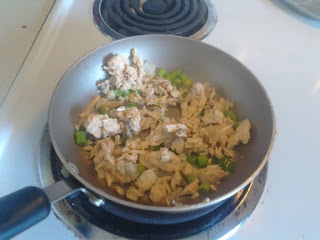 Then I realized I had forgotten to feed the cats. Actually, I realized I had locked the annoying cat out for two days and he was yowling at the door. I usually solve that problem by putting on the Legendary Stardust cowboy, but my wife and daughter had entrusted me with care for the kitties and I could not let them down.
And then I realized, the catfood and the salmon looked amazingly the same. Had my wife put half a can of catfood in the refrigerator because she knew I would forget to feed the cat, or was it salmon?
I ate it anyway...
It was not all that great... Now I have added queasiness to my chronic headache, backache, and anxiety about visiting old people that could die at anytime and I don't visit them, and the hundred and eighty acres of straw I have not started to bale yet or the fact that I have no vanilla ice cream to make a root beer float.
I've switched the music... I thought it was a Beach Boys tape but for some reason I has random Joan Jett songs and some very offensive modern alternative country music on it. (SomaFM)

Didn't seem to help...
Posted by buddeshepherd at 3:14 PM