I have a splitting headache...
If my daughter was here she would say, "no one cares about your personal problems, the world is full of suffering."
She would be so happy to get to use that line on her father that she would most likely then get me more coffee and give me a back-rub.
My wife would make me take medicine and tell me to eat breakfast.
But they are gone.
I first got the headache yesterday when I arrived at the field I was to stack. The field is owned by the widow of a farmer I always admired. He was a farmer who was a farmer because he loved the ground and the act of farming, not because he wanted to farm 10,000 acres.
And then he died.
I looked at his tractor a year or so ago.
The last time he was driving his White 2-135 he was eating an apple. He got an apple for me also. I was no-tilling wheat for him and he was pulling a drill behind his Roterra (large rototiller that works the ground with horizontally rotating tines instead of vertical tines). We were going to compare yields.
Next thing I knew he was in the hospital and by the time I figured out how to go visit him it was too late.
So I got to his field and got to thinking about the times I had been in this field before it was rented to better farmers than I, and I got to thinking about the funeral I have to attend today and my brian started to hurt.
I'd say it was just stress but my skin also hurt and I had stomach cramps.
I picked up a couple loads and was a little distressed that my stacks were not straight. So I pulled down into the lower corner of the field where no one could see me and took a nap.
I saw movement out of the corner of my eye.
I was parked next to a yellow-jacket's nest.
But, true to my "side-ways" style luck, I did not get stung.
I stacked 26 stacks or three-truckloads by 5 p.m. I should have been able to do it in four hours instead of 8 hrs.
I made more than one trip down to the shade tree.
In the mean time I watched traffic on Hwy 18.
It never stopped.
People on their way to gamble at the casino I suppose.
The only reason I would not rather be a farmer in the 1950's is lack of air conditioned tractors.
Here is a photo of another oak tree.
It is not perfect. It has two trunks.
Some day I will find the perfect oak tree. But-of-course, I will not have a camera... 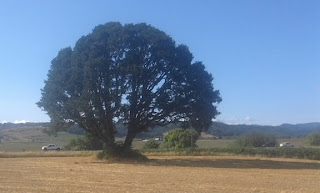 AND here is a photo of corn. This is taken from the same spot as all the other corn photos. The no-till corn is too short. It has good color but the stalks are skinny and the plant is short. I did not look at the ears yet. I suspect there was more compaction than I thought. My brother dug up roots and they were not going sideways. There was a decent root ball. The pH is not the best. 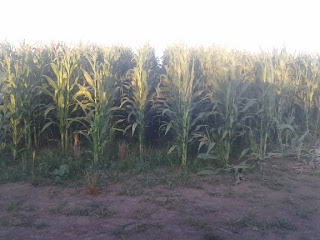