We bale straw and break things

I have a clever plan...
I am making 14 x 18 x 46" wheat straw bales for erosion control.
Since I am paid by the bale I am using the smaller size bales to get more bales per stack. 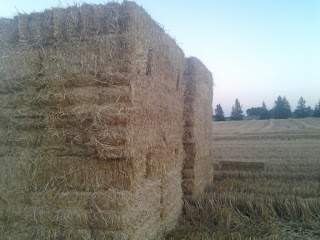 I got so excited about it all that I went out and bought a baler... 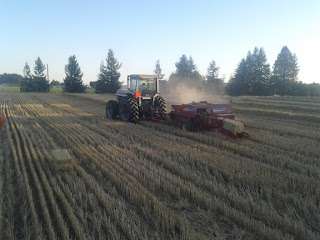 I often have clever plans...
They never result in any large payoffs, just more work.
I usually don't borrow money to further my plans but this baler was almost new and it was very shiny!
Last year I rented a baler and last year I had lots of really pretty bright wheat straw with long stems.
Last year I sold two loads right out of the field.
Last year I had unlimited storage.
Last year I had a fellow who wanted to haul for me and was happy to be left alone with the ten truck loads and he hauled a couple loads a day.
This year the farmer decided he didn't want me to swath the straw before baling. He has an IH combine with a 25 foot header. This makes nice windrows but it also puts all the chaff in the windrow. This may be a problem. But, I won't know until I sell the first load.
The fellow who is buying the straw has not paid me for four loads from last year. History has shown that he will pay me but probably not before he needs more straw.
My back-up plan of selling straw to the local horse ladies may not work due to the shortness of the straw and the amount of chaff in the bales.
I am also not getting the volume of straw I need. It appears that 100 acres will only bring me 6-8 loads instead of 8-10 loads.
And then things have been breaking.
First the PTO clutch came off the baler. It was not a big deal. It seems it was only held on by one bolt anyway. But it came off at 6 pm and there was no place to buy sex communist thread bolts after 6 pm.
Yesterday my little helper got it going and actually baled 1,000 bales. But at 6 pm the PTO adapter broke in two.
He was at the far end of Grand Island loop road by the state park and I was 15 miles away stacking for someone else.
Strangely enough, he got a ride to the pickup.
We did not have another adapter.
My brother made a quick trip to town and found another 1000 rpm to 540 PTO adapter.
Our little helper went back and attempted to install the adapter.
He called me to say it didn't fit.
I said, "What do you mean it doesn't fit, it is a standard shaft size it has to fit!"
He said, "It doesn't fit."
I said, "Well bring the PTO shaft home and we will make it fit."
He said, "I have to go back?"
I said, "yes..."
I got home at 10 p.m. and was able to resolve the problem by 10:30.
Because I am practically a mechanical genius I am sure...
I used a vice, a rubber mallet, some anti-seize lubricant, and (don't tell anyone) a air power die-grinder.
I think it will wear in...
I wish someone would give me 1.2 million dollars... 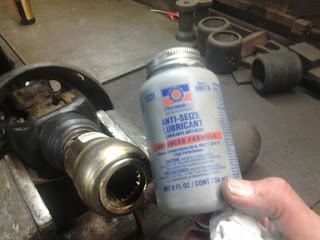 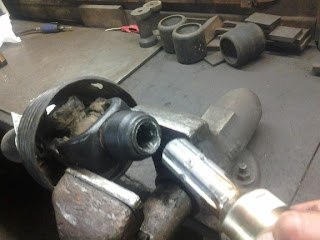 Note: A word of explanation, I am using the infamous 2-155 from the land of Obama Rodeo Clowns which is the anti-tractor. Meaning Everything that was supposed to be right turned out to be wrong-as in screwed up.
White tractors with a digital tach have a setting to read the PTO rpm. You can set it to 540 or 1000. It is just a switch in the tach. It doesn't affect the actual PTO speed. This 2-155 is 1000 rpm only. However, the 2-155 is 160hp. So... We put a 1000 to 540 PTO adapter on, set the Tach to 540 PTO and run the tractor rpm to match the 540 rpm reading on the tach. This makes the tractor run at 1100 rpm which is enough to run the alternator and A/C but is considerably less fuel consumption and slower forward speed. Seems to work quite well as long as you remember to NEVER open it wide open with the PTO engaged...
Pain and suffering will occur!!!!
I just need to make it to the end of the summer...
1.2 million dollars, is that too much to ask?
Posted by buddeshepherd at 8:01 AM