Five inches of rain in one weekend can make it a little difficult to harvest corn for silage. 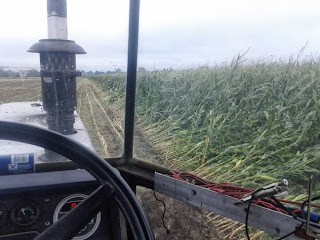 The accompanying rain tended to make it go down a little. 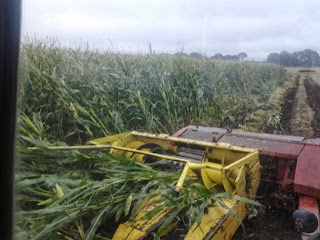 We cannot drive trucks in the field so the silage has to be hauled out in a big box and dumped into the trusty old IH. 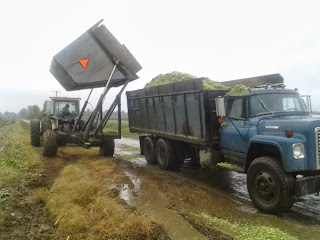 Then it started raining again. It was so muddy that the silage chopper would not track straight behind the tractor. The tractor was ok as it has front wheel assist.
Part of the problem is that the three-row header is very heavy and the outboard tire was plugging up with mud and not turning. So we extended the axles and put on a wider tire. 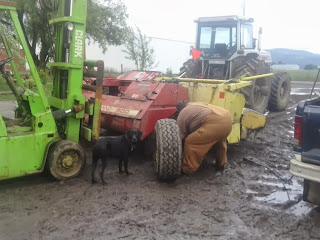 I was calling around and looking for wider tires when I remembered a friend who said he had a couple NH 900 choppers with extended axles that he was going to scrap. I called another friend who is good friends with this guy and talks to him all the time. I got a call this morning that if I would go get the remaining NH 900 from a dairy at Nehalem I could have it. It has tandem axles on each side and metal alert.
But, it had been setting outside within two miles of the beach for the past decade or so. 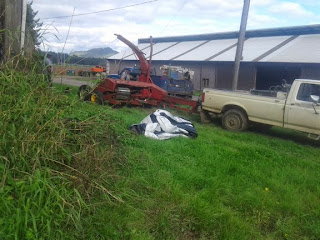 I of course brought it home. It was an interesting trip down some of the most narrow and twisting paved roads you have ever seen.
I was going to just pull the axles but the dairyman said he would be glad to help me get it ready to tow but he did not want it left at his dairy even for scrap metal. So after much head scratching and discussing we removed the very heavy auger base hay pickup and connected the chopper to my pickup.
I had a wheel bearing fail within the first fifty feet and I hit a bridge going through the Indian reservation but I made it home just after dark. My pickup used a tank and a half of gasoline. I barely made it home as my brother's employee neglected to fill the second tank. I got about 6 mpg. Lots of hills.
I think if you click here you can see the route.
There are a lot of expensive parts on it which I will use over the next few years.
It was an all day project.
Today was sunny and tomorrow will be sunny as well. It was beautiful at the beach. Hopefully we will be able to chop all day tomorrow.
Posted by buddeshepherd at 10:02 PM