Today I bought a motorcycle.
Most likely you have never heard of the Honda Ascot VT500FT. It was not a big seller.

(Although I think it had more of a life with a quarter fairing and a bigger gas tank in Europe and the UK as the VT500E.)
The Ascot had somewhat of an identity crisis.
The Honda Ascot VT500 was produced from 1983-84. It suffered a bit of an identity crisis in the USA.
The engine was a 52 degree V-Twin. This same engine was used in the embarrassingly horrible Honda Shadow and perhaps that stigma carried over. However, the engine is quite interesting. Honda offset the crankpins to overcome the vibration inherent in design, without using power hogging counter balancers. The result was a slim well mannered engine with plenty of torque.
The Ascot VT built on the Ascot 500 single was quick and nimble around town and on narrow country roads but which had a reputation of being underpowered on the straight aways. The addition of the V-Twin gave it better power in the top end but it just never caught on with buyers.
I've wanted one since reading the reviews in Cycle World in 1984. I liked the styling, while it is inspired by the famous Ascot track it is obviously not a flat-tracker. However, it is a light weight (425lbs) basic motorcycle, shaft drive, disk front brake, comfortable upright sitting position, and just a basic nice handling simple motorcycle. Something fun to ride. Which is exactly what I have always wanted in a motorcycle.
Sort of like my Triumph but with electric start, reliable electronics, non-vibrating handlebars. 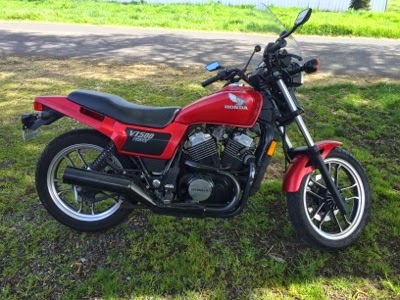 I really like it.
This is an amazing thing for me to admit. I always have buyer's remorse. I almost never buy something and have it be better than I expected. I'm almost always disappointed.
I was impressed after the first corner. It is light weight, and while it doesn't have the midrange torque of the Triumph, it corners very well. It is a very comfortable motorcycle to ride.
I almost bought Scooter Boy's BMW R65 but he was stuck at $2,000 and I was not so thrilled about the BMW. Seemed a bit stodgy.
Took my daughter for a nice long ride. We took the back roads to the Dairy Queen and had strawberry sundaes. She had a big grin on her face. She likes it.
What more to life is there?

Note: I should also give credit to my wife who told me it she thought I should buy the Ascot. When one's wife gives you the approval to buy things like Studebakers or Dynaco amplifiers, or motorcycles you should always say "Thank You Very Much." Also, a thanks to my brother-in-law in Eugene who was going to go look at the Ascot with me, and when a friend came over to help me spread fertilizer and I couldn't leave, went ahead and looked at the Ascot and then called me and told me if I didn't buy it he was thinking about buying it for himself, and then he actually bought it and showed up with it at my house today and build a railing for our wheelchair ramp.
Posted by buddeshepherd at 10:40 PM