In 1989 I saw Joe Ely at the Pine Street Theater in Portland. It was an a amazing show. I think he played every song he ever wrote and sang with such intensity and energy he was drenched in sweat by the end of the show. There were no reserved seats at the Pine Street, in fact the only seating was in the bar so everyone stood to watch the show.  I was right up against the stage.  He gave me a smile and I took his photo. I even got a guitar pick. He seemed like a pretty decent guy.
Last night my lovely and gracious wife took me to see Joe Ely at the Aladdin theater in Portland. It is always a bit of a culture shock for me to leave the farm. I am a bit amazed at how much the guys look like Scruffy from Scooby-Doo and the girls all look like refugees from an 80's punk band. I get the thrift store thing. Yes, we did that back in college when we were trying to be hip and happening and we had so much more insight into world events because we just took lit 101, and had some freaky angry instructor expose the evils of capitalism and Christians and tell us Jesus was a Marxist, and music was so real and all that BS.
It would seem that 35 years later, not much has changed. Other than the fact that everyone under 60 years of age in Portland is doing this and everyone looks the same. It kind of seems that the whole "Keep Portland Weird," slogan is a cry of desperation. What was cool about Weird Portland in the old days is that no one knew they were weird. They were just doing their weird stuff and living their weird lives and then it was cool. If you have to try to be weird you are pretentious.
But, I digress...
We went to bulk Goodwill were I picked up an Irish Rovers album and some not very good jazz. The scruffies were kind of aggressive. It really bugs me to see people throwing books and records around in the bulk bins. I know they are destined for the trash but I am a polite and respectful person.
I found a dual 1019 in a record console. Someone had pulled the cartridge and the spindle, of course...
Then we wandered around the Sellwood area for a while. It has a lot of old buildings and old neon which we think is cool.
But, again I digress...
Joe Ely was at the Aladdin which has the distinction of showing "Deep Throat" for something like 20 years straight. I'm kind of afraid to use the restrooms. However, the kid taking the tickets was probably born the year the Aladdin peeled "Staring Linda Lovelace," and the "XXX" off the marquee and started booking concerts.
So, I didn't get to use my "two for Deep Throat," line that got a laugh 20 years ago when I saw Ian Tyson there.
The opening singer was terrible. Not that she was a bad singer or guitarist. It was that she talked. She tried to affect a "I'm just a poor black child" attitude and she kept giggling and rolling her eyes. She was very good technically but the in between the songs banter sort of ruined it.
Joe Ely was good. The guy is working class. He grew up in Texas and has pretty much spent his life touring small clubs and singing and playing music.
He brought with him only one guitarist. Well, the guy played guitar, mandolin, and slide guitar, and was pretty incredible in his own right.
The sound was good and tight. They played well together. There was a nice mix of old and new songs. My wife got him to play "Down on The Drag," and he said that was a good choice.
The crowd was older. Of course, since the death of FM radio, where would you hear Joe Ely other than KBOO. I heard him on KFAT/KLOO years ago when they were an alternative country station and played albums. I've heard him on internet radio, but you do have to look to find anything non-mainstream it seems to me.
It was over much to soon. He came back and did a couple more songs. He ended it with his song, "have you ever seen Dallas from a DC-9 at night," which was really good. "Down on the Drag," was good.
I just wished he would have played a bit more. Money is a bit tight and this is a once in a couple decade event for me.
Anyway...
It is pouring down rain and we have 50 mph winds scheduled for tonight.
I'm going to bed. 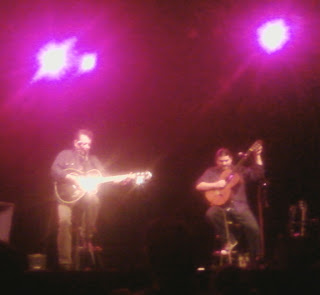 Posted by buddeshepherd at 10:20 PM