I'm finished with planting and our occupy experiment failed

I planted my last 20 acres today. In the rain. No-tilled oats and vetch into chopped wheat stubble. It really worked quite well. A little muddy but only one plug up. One blown hydraulic hose put out enough high pressure oil to pretty much coat the drill. I finished up in the dark. 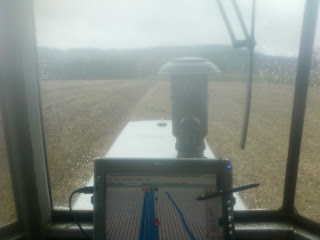 Later "Lulu" and i continued with our occupy the living room protest. She has set up a tent. We demanded ice cream but it was pointed out that we had chocolate pie for dessert and besides, we know where the ice cream is kept.
Then the mayor of the living room went to bed.
We tried the "occupy" chant and worked on a further list of demands but got bored and looked for our own ice cream. After discovering the rocky road had been consumed during the occupy protest yesterday we pretended to have hot chocolate in the igloo tent with some stuffed animals.
I sort of got kicked out of the tent.
Afterward I was quite successful in occupying the bathroom.
I am currently occupying the comfy leather chair the mayor of the living room found on craigslist. Lulu is reading a book.
Yesterday the occupy protest was interrupted by an angry polar bear who announced he was hungry and his plan was to eat little girls. The little girl in question objected in no uncertain terms and returned with a nerf gun and dispatched the offending polar bear in short order.
We are just not the revolutionaries we aspire to be.

Posted by buddeshepherd at 9:07 PM