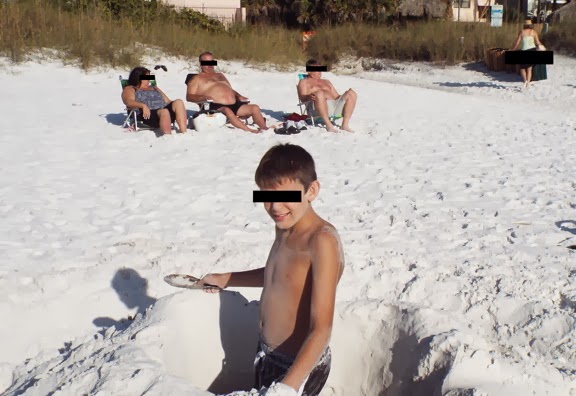 My daughter and this young man had a great time together. They dug this hole at the beach and made a sand castle. They discussed legos and the Percy Jackson series.
Z. (as we will refer to the fine young fellow) gave us a paddle board tour of a mangrove swamp. He was not the one who forgot the paddles at the boat wash station. (We shall not speak of the misadventure. No one on this blog is forgetful.)
Beach access 12 was it's own little slice of life. It is probably because it is so hard to find. You go down a little alley between two hotel resorts. There is barely room to head in a Smart Car. You can park down one side but to get out you have to go down to the end, turn around on the sand, and drive back out the way you came. It is one car at a time or foot traffic.
Pictured behind Z. are some gangsters from New Jersey.
I assume they are gangsters as they talked like the guys on the TV show.
They had comments on many things and talked on the phone a lot.
They drank a lot of cheap beer.
We had a storm last night. I think I need to go repair some roofing.
We are instead watching Hogan's Heroes.
It a good show. It teaches you how to deal with modern institutions in this country.
Left Bank of the Charles had a good post today.
He ordered a battery jump box.
I clicked on his link because it says something about not being legal in Oregon, not energy complaint or some such BS, so I of course want one. We already have one or two but they are kind of crappy.
I figure if it is illegal it has got to be good!
Have a nice day...