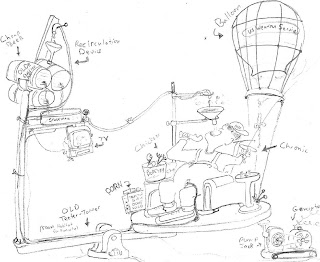 I've been thinking of ways to generate power after stealing dad's most recent Farm Show Magazine. There are ideas for wood gas generators and steam power and how to build a logsplitter out of a huge flywheel and scrap iron and how to turn your combine into a ear corn picker or a front end loader. Farmers just use what they have and build something that is always interesting and often useless.
So I got to thinking about we have sitting around in the winter and I came up with a design which would capitalize on the things my employee loves most about the winter- chicken, beer, and porn. And sitting on his arse and the fact that his neighbors share their chronic...
Here is how it works...
I find an old teeter-totter at the Jimmy Carter store. On one side I mount beer kegs. There is an initial investment in cheap beer, chicken, and I'd have to get one of the medical grow cards but I think in the long run it would pay off. I may have to drop the porn idea as I'm to uptight to actually buy any. I figured the porn would get him to set down but I think a bucket of chicken would do the same thing.
But, I digress.
I fill the kegs with cheap beer. Someone brought me a whole keg of Bud Lite (for slug bait) and I'm sure it is still in the garage of one the houses I used to live at. While I didn't drink it I would never throw anything away so it should be still around.
He drinks the beer which transfers the weight to the other side of the balance beam. The beam depresses a old pump jack which turns a pulley which runs a generator which powers the TV which keeps him interested until he has to go to the bathroom. Since I figure he just goes to the bathroom and sits back down in it anyway... I have a hose connected to the beer keg sort of like reclaiming the water from a steam engine. This transfers weight back to the beer keg. It may water the beer down just a little, I really doubt he could tell the difference with the cheap stuff anyway.
Plus, when he runs out of beer he will light up a spliff which in turn will make him high as a kite, so the beam will rise, pulling up the pump jack and generating more electricity.
I will have to occasionally add more beer and chronic so I will have to be careful to add them at the right time.
Otherwise it should be pretty much self running.
Now I wonder if I could get some stimulus money to build this?
Posted by buddeshepherd at 8:56 PM