I am not a mechanic

Perhaps I have mentioned this before...
I suppose I should ask for help on NewAgTalk but I'll just figure it out myself.
I'm pulling the engine on the 2-155 so we can work on the three-speed. There is a process for pulling the engine on a White tractor. The White has a short shaft which goes through the three-speed and connects to the transmission. The problem is that the shaft can stick in either the engine drive hub or in the transmission hub. There is a little plug that you remove and you screw this special tool which is supposed to lock the shaft so it disconnects from the engine hub. It doesn't work.
There is another problem. I don't have a chain host where I am working now so I am going to use a loader tractor or a hay squeeze to pull the engine.
After studying the situation I decided that there was enough room to slide the engine forward on the mounts and if the shaft sticks in the engine hub I will slide the engine back, reconnect the three speed and remove the whole thing as one unit.
So I blocked up the three speed, removed the bolts around the bell housing and the motor mount bolts and I slid the engine ahead with a strategically place pry bar. In the process I removed the fuel tank. I always forget how to get the fuel tank in and out. There is a special trick.
It actually worked. There was just enough room. 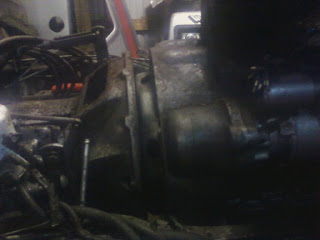 Tomorrow I will get a loader and pull the engine.
I like tinkering, wiring up switches, doing interesting things, building stuff on my drill, fooling with baler knotters, I don't like doing real mechanical work... Or getting dirty. 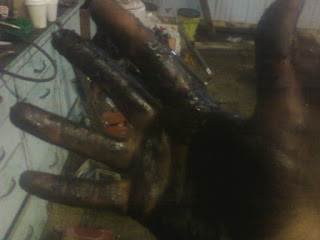 Posted by buddeshepherd at 8:37 PM