The Adjustable Wrench and the Damage Done

I was in a feed grinding frenzy yesterday.  I had several calls for barrels of feed and I also got a call for a ton of wheat. I thought that would be easy to find. I discovered most folks have sold their wheat and it is expensive and hard to find. I scored a ton which had some wet chunks from around the auger and fired up the hammer mill. I found that fellow who wanted the ton had found some grain closer but that made little difference to my plans as I need the whole grains anyway.
The first feed customer showed up when I was adding the alfalfa. I was in a hurry to get done and I pulled the baffle out of the mill so the alfalfa would flow in better. Suddenly there was a crash and bang and the hammer mill jumped an inch in the air. A handful of bolts dropped out the bottom where the vent to control the airflow is. It cleared out right away and so I finished the bag of feed.
Then the hay customer showed up.
It alternated between rain showers and clouds as I filled the bin.
The chicken feed customer took an extra two barrels.
The hay fellow also took a 50lb bag of chicken feed, but when I checked the weight it turned out to be 40lbs so I sold it to him for $5. When it cam time to settle up the bill was $89. He gave me a hundred and said to keep the change as I gave him a good deal last time. I argued briefly... Did make me feel good.
I went and checked the hammer mill. Half the hammers have broken bolts and the screen does not look so good. It also split the top and put quite a few dents in it.
Good thing the adjustable wrench was one of those cheapo wrenches from China. A real crescent would have probably blow up my mill.
Here is the damage: 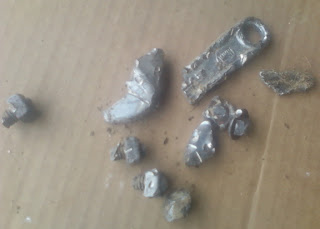 Can you spot the parts of the wrench? 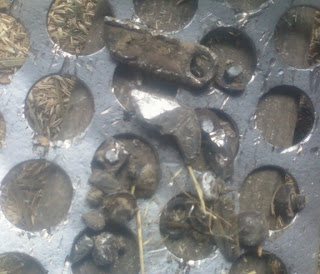 Posted by buddeshepherd at 6:06 PM