An update on that quest for 1.2 million dollars

I had $50 worth of donations in my paypal account but I seem to have blown it on Waylon Jennings albums and a NOS plastic name badge for the side of my tractor that reads "WFE."
I also bought a VW powered screwtype aircompressor which I can tow behind the Ford Ranger I bought from the scrap guy.
The air compressor is pretty cool. But, as it is with all of my purchases, there is a little problem. The air kick down valve doesn't work so it kills the engine when it builds up pressure.
It was cheap. The air wand was not. It cost $175 but it has a venturi thing which almost doubles the flow!
But, I digress...
I am lazy.
It is 8:27 a.m. and I can hear my brother hard at work.
I am supposed to be meeting someone to install a new window in my tractor.
I am soaking the new window and old window gasket (which are attached) in the hot tub. I should be in the hot tub with a little disco music and some candles but it is 8:27 am and my gold chains distract the neighbors in bright morning sunlight.
Actually there is no sunlight and I should be swathing ryegrass as I'm sure Orin is doing.
With 1.2 million dollars I assure you my posts on laziness would be so very much more interesting! 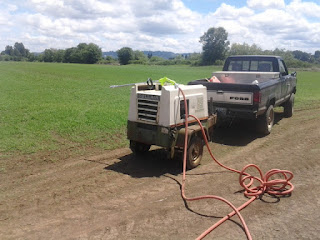 UPDATE at 12 noon or so...
Ok so here is the real story...
I put the window in the bathtub and ran hot water on it to loosen the rubber seal. I sort of drifted off there for a minute and flooded the bathroom. It took me several hours to mop up the floor and get a fan going. Then I had to crawl under the house and cut holes in the insulation and make sure hole I cut in the furnace duct-the last time this happened was still there.
While I was putzing about with all of this the guy who was supposed to help me put in the window came out and then left. You see, he didn't really want to install the window, he just wanted me to think he did. This is because I've helped him a number of times in the past and he really likes the idea of helping me back.
(These are the same people who told MuddyValley they were related to me when MuddyValley and company essentially known who my relatives were since 1979.)
So I'm feeling a bit grumpy. It is drizzling rain. It will be 90 degrees by the end of the week. I'm not getting work done.
I called someone to attempt to get a new bathtub installed or at least a drain hole cut in it. I'm attempting to get a guy to fix the insulation, the floor, and the tub. Apparently you can't get the same guy to do all three. He is supposed to come out and tell me if there is enough damage to make an insurance claim. This is the third time this has happened.
What kind of an idiot puts a bathtub in without an over flow drain? The sort of idiots that build manufactured homes, thank you very much... They will scab on fake shutters which fall off in a windstorm but they won't put in a $%^&*! overflow drain in the bathtub...
This is added to the baler I have to find a tire for, the combine which needs to be repaired, the airconditioning on the other combine, the tractor window, the tractor A/C, the swathers, the rake, and whatever else I have forgotten. And all I really want to do is fix the valve on my new Air Compressor. That would be an interesting job.
And my wife is gone, I burned the beans which I have had for every meal since she left, I'm out of coffee, the boxes of Krispy Kreme doughnuts I bought from the neighbor girl's fundraiser are stale, and my back hurts.
However, I got the cat to stop yowling. I put the $%^&*er out on the porch. So, overall I'm having a nice lunch.
I would like to issue a disclaimer along the lines of the one found in Gorgesgrouse today.
I really am grumpier than I sound in my blog...
Thankyou, have a nice day...


Posted by buddeshepherd at 8:35 AM