Gator in the ditch and I hate hay

Playing a prank on the kids is getting harder and harder. They are much less gullible trusting than they once were. 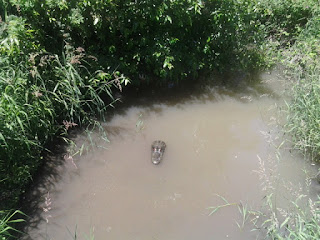 My brother got a gator decoy. (I think he gets distracted while ordering tractor parts online.)
What we should have done is put it under the trees across the river where they like to swim.
Instead I put it in the big drainage ditch below the hill and we told the kids there was a cute family of baby ducks swimming with their mommy.
It was amusing but not quite the screaming cries of terror we had envisioned.
I also used the same line on my wife and she was amused.
I had hoped the tree trimming folks employed by the Electric Company would see it and react also. They did not.
Our lines were clear and so they spent the day setting in their air conditioned big diesel truck in the shade. I wonder if they got bored?
But, I digress.
I was raking hay and it was 85 degrees. I got sunburned.
The only small tractor that is currently running is an IH 656 hydro of indeterminate age. I was pulling a model 56 New Holland rake.
There is a lot of heat that comes off that hydro!
We should operate a living history museum...
I hate doing hay. It was once my favorite time of year. My daughter says I am grumpy. 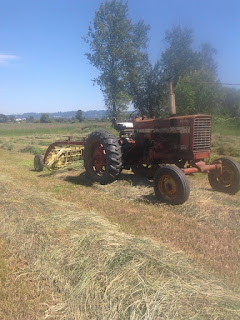 Posted by buddeshepherd at 7:39 AM