I took the day off work. My supervisor gave us a talk about the purpose of Personal Time Off. We are to use it to relax and rejuvenate ourselves.

Further plans for today are to make more pig feed, look at a couple fields someone wants no-tilled to wheat, and mow the lawn.

I have inadvertently gotten back into the feed making business. I have 3,000lbs of peas which were tested at a whopping 40% protein, a couple ton of triticale, six big bags (700lb bags?) of oat screenings and a Pearson's Square App on my phone.

Saturday I started calling previous customers. I have one person that wants 500lbs today. I had a 1200lb bag left over from my previous misadventures and so I thought I would mix it with my new batch which has a lot of alfalfa in it and make 3 mm pellets. The peas in the old batch were extremely dirty and thus horribly dusty when ground. I had the bright idea of turning the mix into 3 mm pellets. 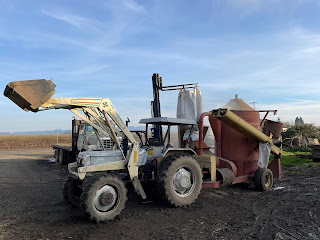 I started at 4:30 and finished at 7:30 p.m. Ran the tractor out of diesel at 7:28 p.m. Then when I was moving the bag of pellets I spilled the bag. Then I was grumpy with my wife. Not a good evening. Plus, the Sunday sermon was about not being angry so I pretty much proved my Mother correct. Don't work on Sunday! 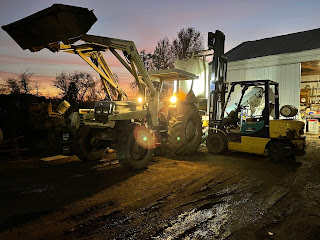 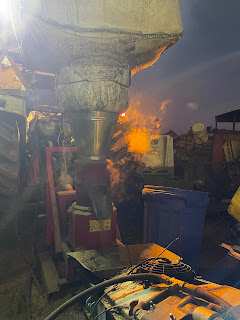 However, I did discover that 350lbs per hour is mindnumpingly slow for pellet production and my little White 2-60 (Fiat 560?) is a bit thirsty even when it is not working hard.

The pellets come out of the pellet mill at 150-170 degrees F. The drop onto a conveyer which is covered and has two 12v radiator fans which blow cooling air on the pellets. The pellets are about 100 degrees when they drop into the bag.  I previously used an auger and no fan which I think worked better but was harder on the pellets. But I loaned my auger to my neighbor and he wants me to grind corn for his distillery and I haven't gotten all the hemp cleaned out of my mixer grinder yet. So I have been avoiding him.

And now for some moralizing...

I saw this on my facebook page. I really used to like the lady who posted it. She seems to have turned into a bit of an Alberta Scrubb in her old age.  I see this post as an example of a typical leftist/progressive viewpoint.

Part of the social action concept of the left is to Redefine cultural values in a negative light and then criticize those values based on YOUR previously defined stereotype.  Listen to this speech by Barak Obama. It sounds good. Just like the old Cold War appeal, "Why can't we all just get along, We all want the same things, don't we?"

We don't want the same things. Jesus was not a socialist. Saying Jesus was a friend to the poor is not even correct. The message of the New Testament is how to survive and even flourish in any situation. If you are poor, a slave, under an oppressive regime, or you are richer than Daddy Warbucks, your responsibility is to show the Love Of God to your fellow man. Jesus upset the money changers in the Temple because they were perverting the institution/mission of the Church. The brotherhood of believers as well as individual Christians have responsibilities to help one another and to reach out to the unbeliever. But, society is changed one heart at a time and not by social action or legislation or force of arms.

In 1971, Saul Alinsky wrote an entertaining classic on grassroots organizing titled Rules for Radicals. Those who prefer cooperative tactics describe the book as out-of-date. Nevertheless, it provides some of the best advice on confrontational tactics. Alinsky begins this way: What follows is for those who want to change the world from what it is to what they believe it should be. The Prince was written by Machiavelli for the Haves on how to hold power. Rules for Radicals is written for the Have-Nots on how to take it away. His "rules" derive from many successful campaigns where he helped poor people fighting power and privilege.

For Alinsky, organizing is the process of highlighting what is wrong and convincing people they can actually do something about it. The two are linked. If people feel they don't have the power to change a bad situation, they stop thinking about it.

According to Alinsky, the organizer, especially a paid organizer from outside, must first overcome suspicion and establish credibility. Next the organizer must begin the task of agitating: rubbing resentments, fanning hostilities, and searching out controversy. This is necessary to get people to participate. An organizer has to attack apathy and disturb the prevailing patterns of complacent community life where people have simply come to accept a bad situation. Alinsky would say, "The first step in community organization is community disorganization."

Through a process combining hope and resentment, the organizer tries to create a "mass army" that brings in as many recruits as possible from local organizations, churches, services groups, labor unions, corner gangs, and individuals.

Alinsky provides a collection of rules to guide the process. But he emphasizes these rules must be translated into real-life tactics that are fluid and responsive to the situation at hand.Rule 1: Power is not only what you have, but what an opponent thinks you have. If your organization is small, hide your numbers in the dark and raise a din that will make everyone think you have many more people than you do.Rule 2: Never go outside the experience of your people. The result is confusion, fear, and retreat. Rule 3: Whenever possible, go outside the experience of an opponent. Here you want to cause confusion, fear, and retreat. Rule 4: Make opponents live up to their own book of rules. "You can kill them with this, for they can no more obey their own rules than the Christian church can live up to Christianity."Rule 5: Ridicule is man's most potent weapon. It's hard to counterattack ridicule, and it infuriates the opposition, which then reacts to your advantage.Rule 6: A good tactic is one your people enjoy. "If your people aren't having a ball doing it, there is something very wrong with the tactic."Rule 7: A tactic that drags on for too long becomes a drag. Commitment may become ritualistic as people turn to other issues.Rule 8: Keep the pressure on. Use different tactics and actions and use all events of the period for your purpose. "The major premise for tactics is the development of operations that will maintain a constant pressure upon the opposition. It is this that will cause the opposition to react to your advantage."Rule 9: The threat is more terrifying than the thing itself. When Alinsky leaked word that large numbers of poor people were going to tie up the washrooms of O'Hare Airport, Chicago city authorities quickly agreed to act on a longstanding commitment to a ghetto organization. They imagined the mayhem as thousands of passengers poured off airplanes to discover every washroom occupied. Then they imagined the international embarrassment and the damage to the city's reputation.Rule 10: The price of a successful attack is a constructive alternative. Avoid being trapped by an opponent or an interviewer who says, "Okay, what would you do?"Rule 11: Pick the target, freeze it, personalize it, polarize it. Don't try to attack abstract corporations or bureaucracies. Identify a responsible individual. Ignore attempts to shift or spread the blame.

According to Alinsky, the main job of the organizer is to bait an opponent into reacting. "The enemy properly goaded and guided in his reaction will be your major strength."

Posted by buddeshepherd at 9:00 AM