It has been rather chilly in my neck of the woods. The temperatures have been in the teens. (Using the nonCommunist system of indicating temperature)
This has made groundskeeping a bit uncomfortable. It is not bad when the sun comes out. The worst thing is having five layers of clothes and having to go to the bathroom. I've considered just pooping myself but eventually I am going to have to get down to my underwear and I suspect there would be some objection from the home laundry department. 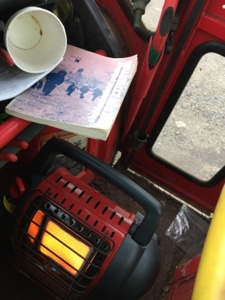 My lovely wife got me a Mr. Heater for Christmas. I'm pretty sure this would not be allowed. I keep quiet about it.

I've been raking leaves and cutting woody plants. The leaves are usually frozen to the ground but the point is really to work hard enough to not be cold. It is also good to be seen hauling Gator loads of leaves and clippings around. This makes you look productive. 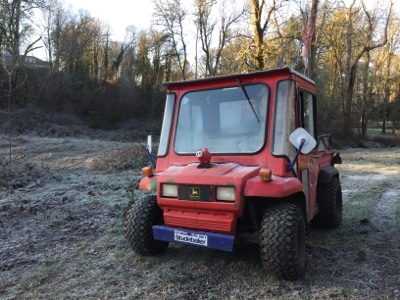 I've actually had a student buy me coffee and a couple offered. I thought this was pretty generous until it was explained that the students get extra points on the meal cards which can be redeemed at Starbucks and so they are not actually spending $5 of student loan money. (I think)
Today it snowed.
My nephew from the city showed up with a spare computer to play some sort of computer game with my daughter. I was attempting to fix the four-wheeler so that I could tow her on an inner tube in the snow.
I forgot to shut the gas off on the four-wheeler and it filled the crankcase up with gasoline. Of course problems ensued and it took me hours. Then we discovered the old tractor tube had a leak which I attempted to patch and the patch failed.
So I took them for a ride in the snow in my pickup. I convinced my daughter to try "cutting cookies." I think she was not all that thrilled.

It is now raining and 29 degrees. I suspect it will be just a little slick in the morning..
Posted by buddeshepherd at 10:43 PM