We have more snow.
I was called in early in the week to come in a 6 a.m. and do snow and ice removal.
I bought extra warm clothes so I would be the one to run the Toro snowplow.
While it is a bit nippy at 6 a.m., I like to run bulldozers, and I am allergic to hard work. It makes me tired.
I zipped around and plowed sidewalks.
The dining hall folks gave us a free breakfast! I had a very decent omelette and gravy.
The guy next to me pocketed a boiled egg for later. Great plan! I wish I would have thought of it.
Then the skid shoes on my plow wore through so the blade hit the ground.
No one was in the shop and so I welded up new wear plates from scrap metal I found in the scrap barrel. 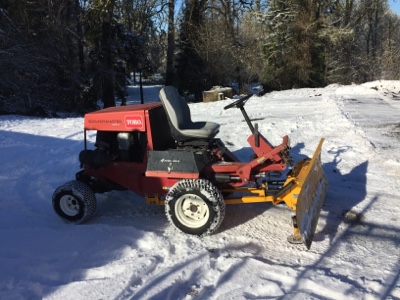 Then I got caught.
It unfortunately improved my status at work. They suspect I have hidden talents.
This resulted in my being called in to do ice melt at 6 a.m. yesterday.
I told the supervisor I was easily confused and needed supervision. So he called in the guy who normally does it but is moving to a different department. 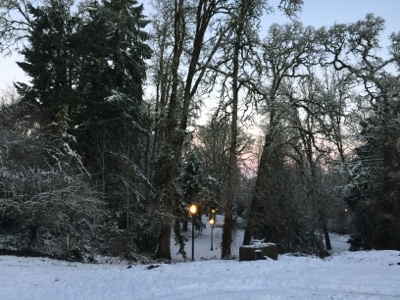 He spent the morning training me. We went to 7-11 for coffee.
It was much better than shoveling ice.
We stretched it out till 2 p.m. when we had to go home so we would not be paid overtime.
I'm hoping I can find parking lots to bulldoze today so I don't have to shovel.
I am now The Lazy Groundskeeper!
Then I came home and we pulled the engine out of the 2-135. Another engine swap coming up. 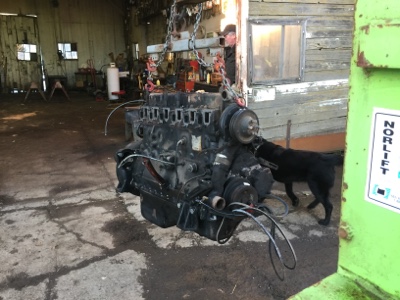 Posted by buddeshepherd at 6:56 AM