How I really feel...

Going to work in the belly of the beast has its advantages. I got a week of paid time off between Christmas and New Years.
I've been working here at home.
I meant to post every day. But, I've been surprisingly busy.
What finally got me to stay up late and rant was started by Scooter Boy and followed up by a perusal of FaceBook.

My brother is in Indiana for Christmas and I'm keeping the store open.
Scooter Boy showed up yesterday and attempted to buy a $3.00 can of staring fluid with a credit card. I said, "Really?!!!"
I told him I couldn't find the credit card machine. I didn't want to be honest rude but I was not going to attempt to figure out how to run a credit card payment for a can of starting fluid.
He needed to get something started for the couple he sold his house to.
I asked him if he thought he still owed me money for hay. He said he had so much trauma in his life that he didn't remember if he paid for hay.
I can't find my receipt book so I guess I don't know either.
I gave him a nearly empty can of starting fluid that I had been saving to shoot with the .22 so I suppose the joke is on me.
He went off on the Russians hacking the election...

I think I can categorically state at this point in my life that I have complete and utter contempt for Democrats. There is no point in arguing with them. I've taken to just laughing and saying, "hey, you know I voted for Trump..."
He repeated what sounded to me like new talking points so I opened Facebook to check out what the shrill shills had to say.
Yes there are new talking points. Apparently they all read Politico every morning or maybe it is just telepathically beamed to them when they roll their first joint of the day.

If I can relate just a few points to perhaps clarify my stance. My wife and family discourages me from telling people they are stupid misguided on FaceBook. 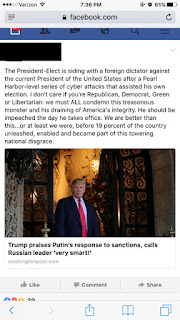 The new word is that the Russians are hacking everything. I saw one comparison to the attack on Pearl Harbor. I did not comment with any bitter laughter. Not really a lot of sailors dying in pain while swimming in burning bunker crude with a Russian Phishing scheme (but upsetting nonetheless when it is that evil Demon (ex Democrat) Donald Trump) and a suspected find of code associated with Russian hackers on a laptop that might be connected to a Vermont Utility.
Look you dumbasses... Two things...
First, The reason Hillary was in trouble was that she her own server outside of gubment and storing classified info on her own computer. It was not considered secure. I want to say, "Look you IDIOTS, this is why she was NOT SUPPOSED TO DO IT."  Of course when you just go ahead and give up your password it doesn't matter how many layers of security you have.
Not to mention Weiner Boy...
Secondly, For years, conservative alarmists have been going on about the vulnerabilities to the US electrical grid. For years they have complained about the gubment's indifference to this problem.
Here is an article from this summer off of NewsMax.
Now that it might have happened it is Trump's fault. How do you not expect my to just flat out call you a moron?

And finally...
About the election hacking...
1. The USA and every other country in the world does what it can to influence politics in other countries to its best advantage. SO why wouldn't the Ruskies? AND, of course they have been doing it for years. It is probably why Obama got elected in the first place.
2. What about the information that was revealed and what about the early reports that the Republican's were not stupid enough to fall for a fake Google email requesting a password?
Also, In a side note: I think all the fighting and dirty tricks the Republican's were playing on each other probably came out in the primaries so I suppose I could add that to the Loony Liberal theory that Trump was picked by Putin preferably presumptuously.
3. This idea that the Russians have the goods on Trump and are going to blackmail him to do something. I'm not sure people's opinion on Trump could really go any lower. I'm not sure it matters. I fail to see what the long range goal would be. Perhaps not bombing Islamic nut jobs?
4. When I was a young liberal leaning fellow it was the CIA that was evil and the Russians were just misunderstood and really they were a more free and equal society the us. Not exploiting brown people in any way and never killing anyone who didn't really deserve it.
Last week the Russians became completely evil...
Eurasia has always been at war with Oceana..

The absolute proof that Liberalism is a Mental disorder can be seen with their incredibly ability to ignore years of their own ranting about dirty tricks general evilness of the CIA and count it as a major plus that Hillary was endorsed the CIA. It is amazing to point out what should be an utter conundrum and see the gears skip a fraction of a rotation before that programing they got way back in 1965 at University of Oregon with the purple Koolaid or whatever it was they ingested, kicks in and they happily and gladly exclaim, "Trump is a racist!"

I really don't need to point out that I think Trump is a complete moron and suspect he will do more harm that good and note that he is not Draining the Swamp, Throwing Hilary in Jail, or planning on following through on a lot of other BS, but that is not why I voted for him.
I voted for him just to see you squirm...

That is just wrong on so many levels-I suspect.

What is really disturbing to me is that there is no self awareness on the part of so called liberals.
I can accept the idea that George Bush set the stage for the turnkey police state with the Patriot act but Obama set it in stone by running on a ticket of hope and change and pretending to care about essential freedoms and then expanding censorship, right of due process, restriction of internet security, and the acceptance of the aforementioned Patriot act. And not only that, he continued the was in the Mid East with the upsetting of Egypt and Libia.
I know a few young people who were pretty angry about that and while I think they were misguided in thinking Bernie was going to fix it all, I do understand why they refused to vote for the big H.
But if I can hold George Bush responsible and I can be angry enough to never vote for a Bush again, then can't the libritards admit Obama sold them out and Hillary was his Judas?
Nope!!!
It is back to another pint o special Democrat affirmation cocktail probably happily administered anally...

Now that I have this off my chest, perhaps I can go back to making polite conversation with people who should know better but refuse to think outside their chosen world view.

Posted by buddeshepherd at 12:05 AM