I am a lazy farmer once again

I should be working...
But...
Yesterday we were called to a conference at the rest home where my father now resides. He is not eating. He is depressed.
The nurse went on a long roundabout verbal journey of a discussion what would happen if my Dad had a medical emergency at night. First we thought we were giving them authorization to send him to the emergency room and then, after an hour of beating around the bush in a very nice manner, we found the question was whether we would authorize Hospice.
Why would we not authorize Hospice...? One must assume that Hospice doesn't kill old people, they make their final six months as comfortable as they can within whatever odd bureaucratic restraints are thrust upon them. Moreover, sometimes people get better after receiving extra care which not is not available without being under Hospice.
And while it is my considered opinion that the unnamed other Mennonite rest home killed my aunt because they got tired of her complaining, I'm not blaming hospice for that...and I hardly ever mention that in public...
But, I digress...
It has been showering off and on. This makes it seem like we have a break. But there are things to do. The days pass faster than one would think.
I've got a couple hundred acres to farm and plant in the next two weeks and I doubt it will get done.
Yesterday I was going to work on the dead White 2-155 which is sitting pretty much in the spot at the neighbor's clover field where it died.
But, I installed a light for my lovely wife. I did a pretty poor job of it too. The rafters are too far apart in a trailer house Manufactured home so I was not able to attach the junction box or the conduit to anything so I just wedged it all in.
Afterwards I helped my daughter make a t-shirt. She has visions of starting her own t-shirt company and becoming independently wealthy. That is my fault, I tend to get over enthused at odd and random times. 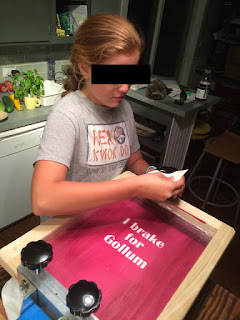 We did tests on old T-shirts. This is my shirt. 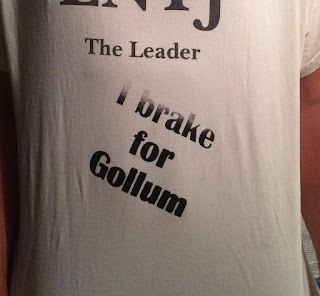 Posted by buddeshepherd at 8:00 AM