I start the day with happiness and end with frustration

My daughter needed a shirt for "Sprit Week" at school and we dug out my box of 30 year old t-shirts. She actually decided that I have two cool t-shirts and borrowed them.
She wore the Silver Surfer shirt for "Hero" day. 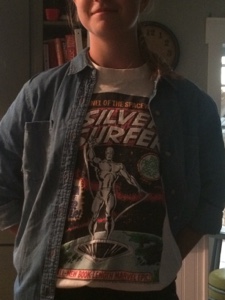 The other is of a band that she hates. I told her it was a band she likes. It's all old people music to her.
Later I will laugh at her...
We started corn silage. MuddyValley brought me some of his honey and some coffee beans.
I told him collieguy and family came to see me yesterday and brought me a collection of lazy farmer clippings.
I think MV feels a bit slighted for not being invited. It was not personal. Crowds frighten me...
We chopped 21 loads after starting at 11 a.m after numerous small delays.
At 4 p.m. I received a text from my wife that she was taking Grandpa to the emergency room as he had fallen and possibly broken a hip.
At load 21 the tractor started making loud chuffing noises.
It is very likely a blown head gasket.
I have three (3) White tractors with Hercules diesel engines. All three are now dead.
I have begged various mechanics to work on these tractors. But they all claim not to know how to work on Hercules.
My helper and I nearly finished converting a Hercules Army truck engine into a tractor engine. As a knowledge base we  used only an I&T shop manual and two-year-old scribbled notes that I took while talking to someone who had done it.
We have never overhauled a diesel engine. It is true that we broke the exhaust manifolds but I we didn't actually know what we were doing...
If you can't do something yourself you are screwed.
So I started changing the oil on the Minneapolis-Moline 1355. I hope I don't kill it as well...
It has been a long, long summer...

Posted by buddeshepherd at 9:50 PM