I try to do a simple engine swap and kind of fail...

I have been avoiding decisions. I really have no clue as to what I should plant. I got pretty far behind this summer stacking for the neighbors and did not get ground worked early in preparation for then end of summer rains.
Part of the problem was also a dead 2-155.
The 2-155 that was abused by the Smiths in Mo to be exact.
If you all remember it lost oil pressure whilst chopping clover silage. Since then it was been parked at the edge of the field. I haven't found anyone who wants to haul it home for me.
So, I pulled the engine and brought the engine home. 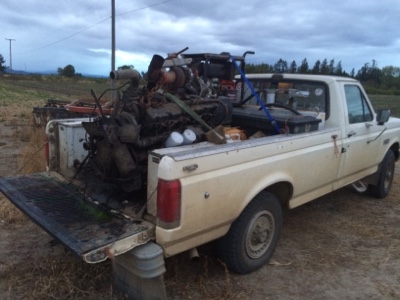 It turned out that the idler gear which drives the oil pump was not tightened properly and worked back and forth on the shaft until it wore out the key.
We pulled the pan and found that the engine was really pretty worn out.
But...
I just happen to have two Hercules LDT 465s diesel engines sitting in large crates in the back yard.
It seemed like a good idea to just install the Army truck engine.
It is not so hard...
You just have to swap manifolds, injector pump, oil pump pick ups, oil pan, timing gears, front engine cover, bell housing, clutch, injectors, and oil filter assembly.
I've never really rebuilt an engine before and so there were a few issues.
My helper and I would spend the day putting it together wrong and then in the evening I would take it apart and put it together correctly. 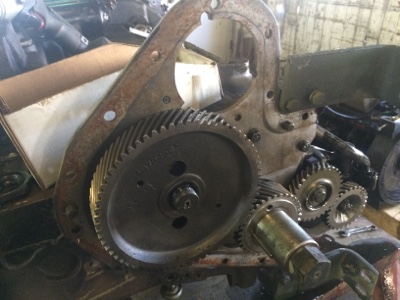 Getting the timing correctly was an issue.
There were supposed to be timing marks on all he gears. You just lined everything up.
I put both engines on TDC so the pump would be in the right place and all the gears would be correct when I took the engines apart.
However, I got the mark wrong on the injector pump gear and lined the pump up at TDC.
When I got the front cover and front pulley on I lined up the mark on the front pulley and discovered the pump is timed for 20 degrees before TDC.
It seems simple. You pull the pump and rotate the gear one tooth. But, there is not enough room in the front housing to turn the gear and the front cover and front pulley had to come off.
Yesterday was the biggest screw up.
I mixed and matched exhaust manifolds as they are a two piece manifold and the one that I took off had a crack. I have several manifolds laying around.
My helper was doing the final tightening and heard a ping. Broken manifold.
My stupidity was soon evident.
When you overhaul an engine you often resurface the intake and exhaust manifolds. If you mix and match parts you get manifolds with different thicknesses. 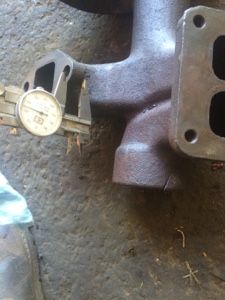 This can be a problem.
So... A new $350 manifold from Iowa and a week to ship and then it has to be surfaced.
Meaning I am short a tractor still.
Posted by buddeshepherd at 7:21 AM