It is 420 in the afternoon. (Of course now that somethings are legal in Oregon it's always 420 time here)

I am sitting in a Wheatfield alongside the highway watching a steady stream of traffic heading either to the casino or coming home from A vacation at the beach.

A seemingly endless small field of wheat straw bales is staring me down.
It's not that big in the grand scheme of things but I won't be home until 11 PM tonight. 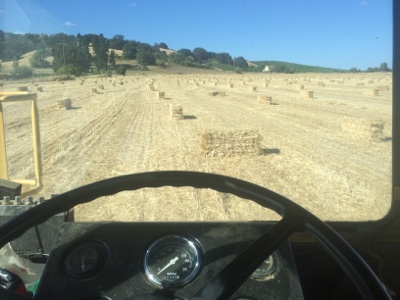 Note the sideways bale in front of me...

I didn't get a very early start. I spent several hours this morning cutting all the twine that it wrapped around the hydraulic motor on the bale pick up. It would seem that there is a problem with the center twine on the bales in the previous field.
I was also trying to help my helper figure out how to adjust the plunger on the New Holland BC 5070 Baler.
Rather cryptic, would be the proper term to describe the instructions in the service manual.
I should have told him to take another day off. But, I really should be bailing.
As spellcheck so aptly puts it, bailing, as in bailing out.
I downloaded a Suspense novel onto my iPhone to listen to but but it got to the sex scene, and when I heard a grandmotherly lady say "@#$%^," but not in reference to a chicken, i shut my phone off from embarrassment. It's back to Sherlock Holmes for me.
How was I to know it was porn? I thought Von LUSTbader was the guys real name...
I could decide not to burn my phone.
I think it will be a long afternoon. I have found, that there are people who are much more enthusiastic than I am.
I have pretty much given up my usual fantasy of a motorhome full of girls coming back the coast after a Husquavarna chainsaw calendar photo shoot who decided to stop along the highway and give the stacker operator hugs and ice cream cones just cause that is what over endowed Swedish girls do in America.
But, ice cream would be nice. The hugs would probably embarrass me any way. The the duck would quack unexpected and afrighten them, spill the ice cream and all would be for naught.

Posted by buddeshepherd at 5:11 PM