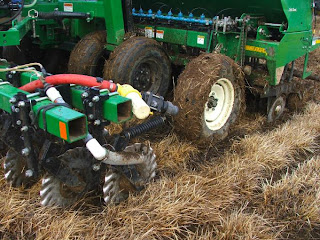 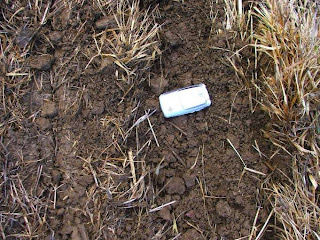 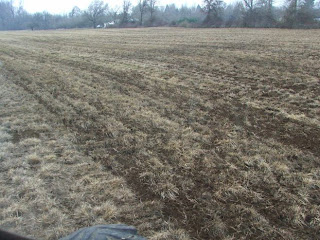 I Planted along the Yamhill River last week. Red silty clay dirt. Started out pretty slimy but dried out over the course of the day. Planted Kanota Oats at 120lbs per acre. 3/4" deep, some more like an inch. No fertilizer.
Silver thing is cell phone thrown in for scale. It is a bit wet but seed is covered. Side walls of trench are crumbling and it is not just making a slot through the mud.
Today I worked on putting fertilizer tubes on the drill. I have the scars to prove it. Nothing like busted knuckles and dirt falling in your eyes and ears.
I also installed air design scrapers, they are a spring loaded scraper with a tungsten blade. Very aggressive, they peel the mud off the inside of the disks so it drops out. The standard v-scrapers just bunch the mud up so it plugs up the small seed tubes. Too many brackets on one bolt. Kind of expensive. I think it cost me $17 per row. I think I paid less then $10 per row to put them on my first drill.
Scrapers and fertilizer tubes are shown below. Seems like there is a lot of wear inside the v openers for only 3500 acres on the drill. The v-openers have a design where one disk leads the other by say 1/8" or so. The leading edge has curled slightly which may explain why the drill doesn't go in. Looks like those tungsten edged scrapers will keep the disk blades pretty sharp. They did on the old drill! 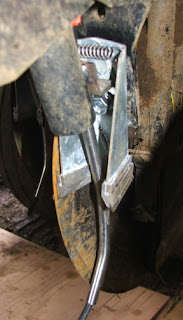 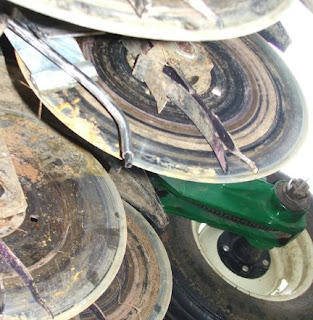