I must face the day...
Yesterday I finished stacking with no problems.
I rained randomly but mostly not on my hay...
My nephew from the big city was camping at the river and he wanted to ride with me in the stacker. He was heading to a family event in a nearby town. When he left he was covered in hay dust. I'm not sure he noticed. I probably should have told him. He gave me a ride back to the farm. There was a bad traffic accident and the highway was backed up so we took our own detour. This led us by the DairyQueen where we got strawberry milkshakes.
Later in the afternoon my wife and I took the daughter to camp, also with no problems. Her old friends from her previous camping and school were happy to see her. One of them was wearing a t-shirt she had made last year. She seemed a bit nervous to begin with. I reassured her by telling her no one would remember her and that they probably would ignore her now that she was going to public school. I also reminded her not to swear and admonished her not to sneak out behind the cabin and smoke cigars. High fire danger this time of year.
I try to be a good dad.
Today the heat returns.
There is more hay to cut and a combine to get going and hay to haul and broken stuff to repair.
Tuesday I have a funeral to attend.
If anyone else decides to pack it in I hope they tell my Uncle he needs to comeback and make more push-off feet for the stacker, I used the last one Sunday. Why don't ghosts ever do anything useful?They hang around and startle people but never take out the trash or play the fiddle at birthday parties or make push-off feet for the stacker. 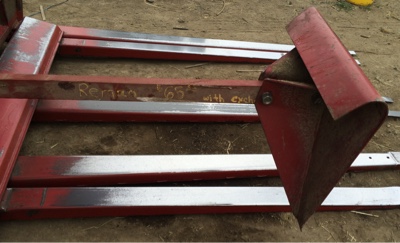 End of an Era, The Last Uncle-Built push-off foot.

Also, we saw TV footage of the naked big ride.
I wonder if there were "Goldbond" dispensing stations along with the free water. All I could think of was the horrible chafing. My wife looked closer and declared the event a fraud. People were wearing underwear.
Once a farmer told me about delivering hay to a nudist family. They invited him in for breakfast. They had bacon. He was entranced by the teen daughter (he was her age at the time) I asked him who cooked the bacon and if anyone was injured. He did not have a good answer for that.
If you were a nudist and camping would you have injuries from roasting marshmallows? Why are people nudists? Is it the free flow of air across the skin? Is it the sun? What makes one feel free? Unsupported body parts swinging in the breeze? The sun warming ones bare skin? I've read National Geographic and while folks in warm countries do tend to run about nekkie-nekkie I'm pretty sure in colder climates they tend to play volley ball with more support.
Well, at least I've got something other than farming to think about today...
Posted by buddeshepherd at 6:23 AM