This was one of those somewhat frustrating days. There are computer and hydraulic problems on the stacker. The diodes on the second table solenoid fried and I attempted to repair them. I am not sure this is truly a user serviceable part. I sent my lovely and gracious wife to pick up a couple from the NH dealership and I then did nothing.
Well, I helped my father with his computer, I unloaded a truck of annual ryegrass, I went after my pickup, I attempted to find a hydraulic valve for the stacker, and I kept forgetting what I was doing. I lost my coffee cup five times and by the time I found it the contents were quite tepid.
After I got my diodes i was able to fry one of them with the soldering iron.
So, it was quite a relief to retire relatively early to the house. However, the family was in bed and didn't seem to need by fatherly attentions.
However, I was anxious to try out the ancient reel to reel tape recorder bequeathed to me by lazy farmer follower, MuddyValley. (you may have seen his weather station link on this page)
It is a Magnecord 728 Professional which would have been pretty much top of the line in 1957. It came with four boxes of tapes on 15" reels.
I am at this very moment listening to a record of the Guarneri Group playing at the Portland Garden Club, from May 5, 1960. (Before I was born)
The program consists of Haydn's Quartet in G Major, Debussy's Quartet in G Minor, The Prayer of the Bullfighter (Turina) and Mozart's Quartet in C Major.
There is absolutely nothing that sounds like the ledge singing, "Standing in the Trashcan thinking of You."
The members of the Guarneri Quartet are most likely pushing up the daisy's at this point in time. I wonder if they ever had the faintest inkling that their little debut in 1960 would be heard by a somewhat grumpy and mostly Philistine farmer in the year 2011.
I am really quite amazed at the sound quality. I am playing it back through my little Radio Shack SA155 1 watt amplifier and Optimus 7 speakers at pretty low volume so as not to wake anyone. There is virtually no background noise sound quality is rich and full bodied. This was recorded with two microphones, which I would have loved to have, but then again-what would I have done with them? I can even imagine I am hearing stereo imaging.
Perhaps if I can find some jazz I will turn into a bit of a "longhair."
Care to see my etchings anyone? 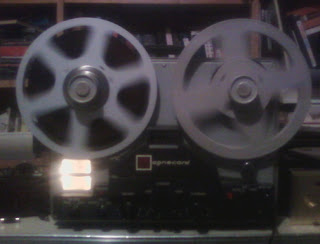 Posted by buddeshepherd at 11:11 PM