Bit-O-Honey bars left on porch, blogger snubbed by reader, perhaps it is a clever plot!

I stumbled out of the house this morning to find a mostly empty box of Bit-O-Honey candy bars left on my porch. I remembered all the Sherlock Holmes stories as well as the Great Brain and using my amazing powers of observation I deduced they had been there all night. (The porch rail was dry under the box)
I don't know if the box was full or not before it was left. Or if the person who left the box shoplifted the almost empty box from Dad's Market or if they were really hungry and ate most of the box, or if they just wanted to taunt me with a box containing three candy bars.
Here is a photo of me with the candy bar.

They are not bad. I understand why Grandpa ate them and also why they lasted for years after his death. They are in little squares with almonds and hard taffy. So pop the little bite-sized square in your mouth and chew on it for a half hour. They are great for eating in the tractor. I think I will supplement my Snickers and Coffee diet with Bit-O-Honey bars from now on.
I got a job baling small Orchard Grass hay bales for a fellow a few miles from home. It is a long story which no one cares about. As i was watching traffic go by I noticed a familiar looking bright red International pickup truck with about 20 cars behind it. Sure enough it was that fellow with the weather station at MuddyValley. I waved but he seemed preoccupied. I think I can say with authority that the flip side of being eccentric is.... oh well perhaps I should not call the kettle black. 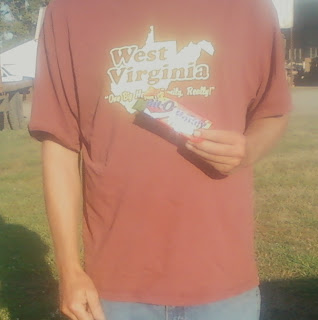 After wandering around the internet I see that people are talking about commenting on government regulations that closed for comments two months ago. That is our dear government. Ask for comments on the internet on a site that no one reads.
CDL's for farm tractors. Great, that is someone's good idea. I read some comments about the regulation change requiring farmers to have PUC's and CDL licenses to haul grain. There were a number of commerical truckers for that one. They are always mad at farmers. I find it funny. If farmers have to get CDL's and PUC's to truck their grain then they will start hauling for hire in their spare time. And, since they don't have to make a living off their trucks they will undercut everyone else. I've seen it happen here where a farmer gets turned in for hauling a couple loads for a neighbor and then he has to get PUC plates and all of a sudden there is more competition.
IF only the budget crisis would shut down DOT and the transportation department instead of the FAA.
Posted by buddeshepherd at 11:57 PM