Being 12 is an interesting state. You are not grown up and you are not quite a child.
Our daughter is 12.
We, as in our family of three, made the decision to put the daughter, who was part of the decision, in private Christian school this year.
I have gotten some negative feedback from people in the neighborhood who are strong public school supporters.
I've heard some negative feedback from people in the church who think the school is a little modern and they also think I'm a little modern.
I'm not especially modern, more post-modern I suppose, mostly just kind of negative and cynical about life in general I think would be more descriptive.
I wanted her to go to private school because I don't really see any point in joining the real world any sooner than you have to.
That is the bottom line.
The private school is populated by kids whose parents care enough to spend money and time in order to send their kids there. The kids are a little sheltered-but, for the most part, they are happy and friendly and enthused and positive.
They have yet to learn the essential survival skill of distrusting authority.
Yesterday, my wife went to see her father and my daughter and I stayed home. I don't really know why. That is just how it worked out.
We went to Church and then went for Chinese food.
Had a nice time. We talked about her school and I told her some stories about being her age. We discussed the differences between my early years of school and how I turned out to be a weird and contrary kid and how she seems to be fairly happy and well adjusted. We discussed how lonely I was as the youngest with my brothers being six and ten years older and her being an only child.
I didn't do all the talking.
We came come and whilst I pondered my turntable plinth misadventure she practiced her guitar. I suggested she look up the girl band, The Donnas. I'm not sure that was a good idea.
I also suggested she learn some Joan Jett songs and pointed out how funny it would be to do a school talent show dressed as an Amish girl and singing a nice song and then launching into "I love Rock and Roll."
We discussed using humor to deflect embarrassment and the theory of making funny sarcastic comments which forced your opponent to laugh but also relieved your frustration. Or how to be actively passive-aggressvie as opposed to a victim.
Then she made an airplane out of cardboard boxes and we mounted Nerf guns in the wings. I took up a position on the trampoline with the Nerf machine gun and she bombed and strafed me. 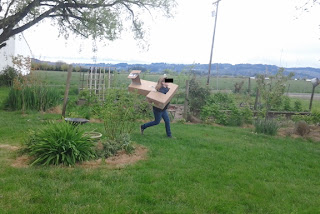 It could be that she is watching way too much Hogan's Heroes.
We had a nice afternoon. 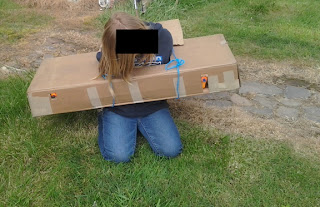 It was pointed out that there is somewhat of a contradiction between attending a Mennonite school and playing war. I noted that the Nerf machine gun was orange. That was not accepted as an argument.
I suppose I should add that, The Donna's are also not the Gospel Echoes.

Someday I will realize I am a failure as a spiritual leader in the home. This is what happens when two youth group outcasts get married...

My daughter is already better than I and seems to realize her father is full of crap. Is having this all out in the open now better than having a false illusion and finding out your father is a fraud later in life?I do not know...
I think I shall go and plant something...
Posted by buddeshepherd at 1:32 PM