I attempt to put the s-155 FWA back together

I have one side of the FWA on the White installed.
The seal is a problem.
The seal cost $350.
It is rather complicated to explain how it works but there are two surfaces that need to pressed in. There is an outer seal and an inner seal. They are connected with a rubber cover. It is very difficult to drive the seal in. 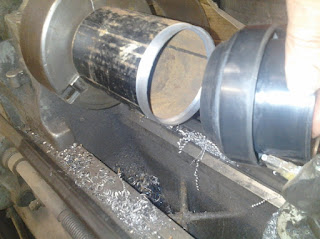 My brother made a seal driver.
I think I damaged the seal. I could not get it to drive in straight. Then I don't think I got the second sealing surface to mate up. I may have cut the outside boot. I won't know until the FWA leaks oil on a hillside. I am not taking the seal on the other side out if I don't have too.
Replacing the upper and lower kingpin bushings is not as difficult as I thought. If you don't take everything else apart as well.
My cousin pointed out that our local deal is advertising for a mechanic in the High Plains Journal. I'm thinking my extensive history of damaging White and Minneapolis-Moline tractors will not really help on my resume.
Posted by buddeshepherd at 6:48 AM