I almost called the sheriff yesterday...
Then I thought about all the times I told by daughter not to rat out her classmates and I decided I was setting a bad example.
So I did not. Plus it would have been way to difficult to explain that my actually objection was not that they were blocking the road now, but that they have been blocking the road every year for the past decade..
Here is the deal...
I do custom planting and I do hay and straw and I end up moving wide equipment all over a 20 mile radius of our farm. I try not to abuse the good will of people who I have to annoy when I take up half the road.
So when I see farmers who just don't care it bugs me.
The ground has been drying out and the big farmers are out in force. I am probably just in a grumpy mood because our sprayer doesn't run and I can't work on it because the shop is full of projects that are waiting on parts and I'm getting really frustrated.
But, I digress...
Now in our area I would estimate that the percentage of people in the general population is about 85 percent. I'd say farmers used to be more like 50 percent but in the last couple years I'd say that has gone up to the 98 percent range. I would qualify those farming over 1500 acres as being in the 99.6 asshole percentage range. Those over 4000 acres 110 percent asshole range.
So yesterday when I went to work on my tractor I was happy to see that the BTO who has ground on Fairview Road was once again using the road as his loading area.
I would happily report the name of the farm but I suppose it is not fair as I don't use my real name although it is not that hard to figure out who I am. Let's just call them "Golden Showers Farms." It is more fitting than their real name. 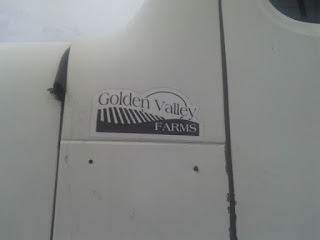 Now I don't really object to people blocking the road from time to time. I've done it at Muddy Valley and I've had to load my drill on the road before. But I don't know of many farmers who do this as a farming practice. (Other than Golden Showers and the Dickhead that sprays for Wilco and the former Western Farm Service.) And do it in same paved road at the same spot for ten years. Especially when they have a 1,000 acre field next to the road. If you have 1,000 acres you can take out a few feet, put rock down, and not block the road. Or perhaps use the driveway of the fellow who you are giving the $250 an acre rent to.

I watched a service truck from a local truck shop try to dodge a fertilizer spreader and a telephone pole. I missed the dumbass employee standing in the middle of the road by inches with my mirror. I should have taken a photo of his, "I'm all alone in the world expression," when he turned around to question my presence on the road. I suppose I should have stopped and expressed myself but the are only drone employees. 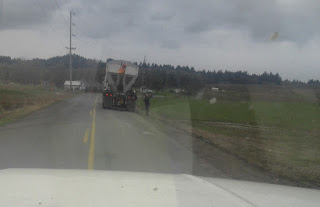 Three hours later they were still there. I watched the school bus go around them. 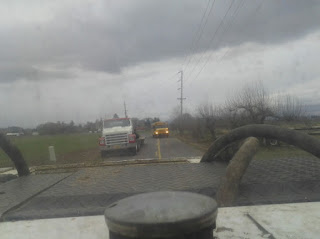 Golden Showers Farms is of course a pillar of the community. People like them on facebook.  They work to end world hunger.  They are the face of modern agriculture. Click here. You all helped to promote their conservation practices, which include farming the ground to a powder and packing it to concrete and then erosion control.
But when it gets right down to it. They take what they want.

So you see all this, Thank a farmer BS and you hear the passion of the American Farmer feeding the world and how we all do it for the most selfless reasons.
It is all a load of crap. Farmers farm because that is what they do. A good percentage of them just want to make a buck. They all pretend to be the countries last great hope. But really, all they want is another 100 acres. They pretend to care but that usually only extends as far as the fencerow. (Perhaps that is the problem, there are no more fencerows...)
There are but a few of them who are social misfits who cannot hold down a job anywhere else. That is the kind I prefer.

"I believe in the future of agriculture, with a faith born not of words but of deeds - achievements won by the present and past generations of agriculturists; in the promise of better days through better ways, even as the better things we now enjoy have come to us from the struggles of former years."

I knew it was BS when I memorized it as an officer, I knew it was BS when I got my state farmer degree. For a while, when I was an accepted up and coming member of the ag community I actually started to drink the koolaid, (Perhaps I should do another Daily Strumpet issue to apologize for being an idiot in 1998) but in recent years I've come to understand it is BS again. (Not that I ever say this to the 3 (three) young farmers who have asked me for advice.)
We are all a bunch of Megalomaniac arseholes and that is how it has always been...

In other related news, some wiseacre wrote me in as a candidate for the soil and water board. Perhaps more than one. I suspect a conspiracy as I personally wrote in the one farmer I knew who would annoy all the other farmers on the board, so I'm saying if I did it to someone else (actually several over the years-and I always lie on surveys) someone would certainly do it to me.
I have been asked to be an "alternate," I think I shall politely decline. After all, I hate everybody...
Posted by buddeshepherd at 8:18 AM