Once upon a time I had a Mr. Coffee. Now the old Mr. Coffee was really nothing special. You put coffee in a filter, you put water in the tank, you put the pot on the hotplate under the coffee drip and you turned it on. I once had one that you could actually set a timer to turn it on it the morning. I was unable to figure out how this worked even though I just last month reprogramed my GPS receiver...
We have a Hamilton-Beach Stay-n-Go coffee maker that is less than a year old. It's claim to fame is the insulated carafe which is supposed to keep the coffee hot but not burn the coffee like the hot plate type coffee makers do.
It came with two insulated coffee mugs which you can set side by side under the drip thing so you can make just two cups of coffee to go.
Now let's put this all in perspective.
Mr. Coffee was the first in 1972 and basic design has not changed that much since then. (although that wikipedia entry was made by Mr. Coffee himself so it might be biased-oh my goodness!)
What is there to change? When I was in Costa Rica years ago I saw Carlo's mom make instant coffee by pouring boiling water through a cotton sock type bag full of ground coffee. The ingenious little device was held open with a wire loop on a wooden stand and the coffee pot or cup sat under the sock. Mr. Coffee just used a paper filter and had a hot plate and a nice plastic case.
The Mr. Coffee is the only good coffee maker I have ever owned. The rest have been fancier with more features and timers and whatever, but they all had one thing in common. They were junk.
So my lovely and gracious wife really wanted another thermal carafe coffee maker. We had one a couple years ago, but that is another story...
I could not find the same model we had before. It's serious flaw was that if you didn't get the carafe positioned correctly under the drip it would make a huge mess.
To be continued. Wife is home...
Anyway...
It is evening and I'm back in my easy chair. I'm not really as annoyed with coffee makers as I was earlier in the day.
I think the point of the story was that the Hamilton-Beach Stay-n-Go has a flaw which pretty much makes me want to smash it with a 10lb hammer.
It leaks when you try to pour. My wife has managed to master the art of pouring from the carafe but I have not. When you attempt to pour a cup of coffee the coffee flows out the fill hole or runs down the pour spout.
Now you would think that with all the millions of dollars that Hamilton-Beach company has you would think they could afford just a little for product testing.
I guess not.
I've been looking at replacing it with a Zojirushi fresh brew. I've found a few on ebay. The consumer reports article I read suggested just buying a good regular coffee maker and pouring the hot coffee into a thermos. 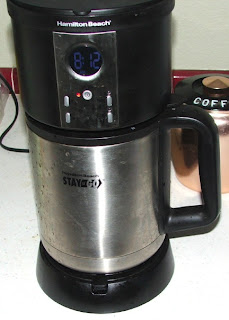 This is a piece of poopie! Don't buy one! (In my humble opinion)

Posted by buddeshepherd at 12:37 PM