October 25, 1854 the anniversary of the ill-fated battle of Balaclava during the Crimean war-

Remembered in "The Charge of The Light Brigade," made famous by Alfred, Lord Tennyson

Half a league onward,

All in the valley of Death

Charge for the guns1' he said:

Was there a man dismay'd?

Not tho' the soldier knew

Their's not to make reply,

Their's not to reason why,

Their's but to do and die:

Cannon in front of them

Boldly they rode and well,

Into the jaws of Death,

Into the mouth of Hell

Flash'd all their sabres bare,

Flash'd as they turn'd in air

Charging an army, while

Right thro' the line they broke;

Then they rode back, but not,

Not the six hundred.

While horse and hero fell,

They that had fought so well

Came thro' the jaws of Death,

Back from the mouth of Hell,

All that was left of them,

When can their glory fade?

O the wild charge they made!

Honour the charge they made! 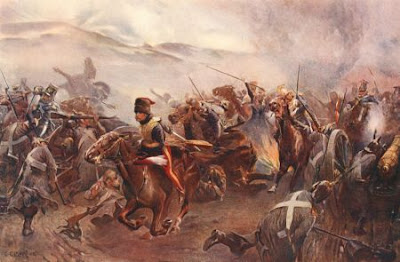 Despite the ill-starred date of our matrimonial bliss we are still married. I see no signs of parting. There is happiness and there are frustrations. That is the way life goes. You enjoy and make the most of the happiness and endure the frustrations. Many of the people I have know for years are on their second marriage. Those mentioned in Tennyson's poem charged into what was assuredly an unsurvivable engagement. Not so many came back as went out. I think perhaps one could liken this to marriage in general...
We had a nice anniversary. No get-a-way to the beach. We installed a fake hardwood floor in our kitchen. I hardly ever am able to help my wife do things like that. I think she appreciated it. We went to the Amity Cafe for supper and breakfast. No one was injured in the installation. 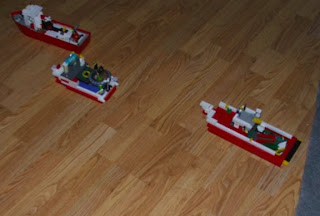 The lego boats have already set sail on the new hardwood "ocean." I would say we have a happy family. I can hear my daughter in the bedroom singing. She has made up a song about all the states, the refrain is, "don't forget Alaska." I don't have a clue where that came from. There is a map of the states on the bedroom wall. She is going to sleep alongside her mother. After she is sleeping I will pick her up and put her in her own bed and tuck her in. On nights that she is unable to finagle a spot beside Mom I lay in bed with her and read her a story. We say our prayers and say goodnight to grandma whose photo is beside the bed. What more can you do? Is there any more meaning to life than that?
Posted by buddeshepherd at 8:43 PM