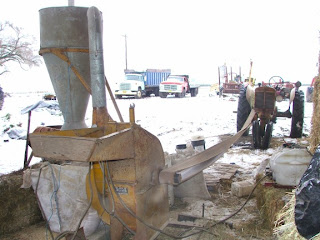 Had my coffee break. Nice fellow who everyone calls "cowboy" brought doughnuts and his friend Mr. Cook. Cowboy is retired. Rebuilds saddles, rides horses, goes to rodeos, wears a big old cowboy hat and a rodeo belt buckle. Used to work for the city road department. So, everyone calls him Cowboy. Mr. Cook is in his 80's. He made a fortune building roads and buildings and doing important things though the 50's till the mid 1980's. He is an interesting old guy. Can't get around without a walker but Cowboy brings him out for coffee break on Saturdays. Usually brings a box of doughnuts.
Phillip also stopped buy. He is your classic old German farmer. Big fellow who has worked like a dog all his life. Not holding up so well. He stops buy a lot more often than he used to. While here he got a call from someone wanting to buy hay. He said he was in an important meeting and would be a while. "Business before pleasure," is what he told the caller. Everyone throught that was pretty funny.
I got a call. Neighbor wants to buy a bag of feed. That would be a 500lb bag of feed. I just put everything away so I've got to go dig the hammer mill and tractor out of the barn again. Have the windrower parked in the way and the battery is dead. Put a charger in it and came in the house. Sitting in my chair having my fourth cup of coffee.
Hammer mill is a story.
I have a kid who used to work for me. Dad always calls him Eddie but that's not his name. Dad is just hard of hearing. Everyone now calls him Eddie.
Well, Eddie wants to be a farmer. He especially likes the riding around in pickups and talking to people, looking at interesting tractors in the Machinery Trader, and doing fun projects. Fun projects may involve a lot of effort but generally they do not qualify as real work.
Eddie raises a few Black Angus steers for beef and he has been complaining about feed prices. Wilco is $10 for a 50lb bag of pellets. I happen to half a truckload of barley and about the same amount of oats. Now what do you do with half truckloads in this day and age. Fuel was $4 a gallon and the nearest cleaner was a 60 mile round trip. So we unloaded the truck into 500lb bags and they are sitting in the barn attracting rats. Eddie was sniffing around and found our pristine 1930 something Minneapolis-Moline hammer mill. He just had to try it out.
This hammer mill was an early acquistion in our collecting efforts. We got it some 20 years ago at the local auction. It has been gradualy being buried under our continual layering of interesting crap since that time. A couple years ago the local steam up folks wanted to borrow it. It was in the summer and I didn't have time to mess with it so I said if they could dig it out they could have it. They didn't dig it out...
So Eddie and I yarded it out. It had good screens and a 20ft flat belt. We built a base and set it up in the barn. Then we discovered our tractor with a belt pulley no longer had the belt pulley. That was quite a hunt. Finally we dug up a NOS pulley out of the old parts house at the farm.
So we were up and running. Except that the pulley was rubbing on the wide front in of the U. I did have a 1949 MM Z with a narrow front but it had never really ran and was setting out behind the house as part of the scrap pile.
The carb was full of rust so I rebuilt it and then dumped some muratic acid in the fuel tank to get rid of the rust. I through the tank in the back of my pickup for a couple days so the acid could slosh around. I then rinsed and dried the tank. It was bright and shiney inside.
My brother is much better at ignition stuff than I am so he got the old girl running. I installed the new tank and the old Z was sounding pretty good. Then I noticed the fuel leaks. The whole bottom of the tank was full of pinholes. I guess I had a tad more rust than I thought. Fortuantly we do have more old MM tractors behind the barn so I had another tank.
We hooked her up to the flat belt and away we went. We are in the feed business now! Would be really stylin if it were 1949!
Posted by buddeshepherd at 11:09 AM