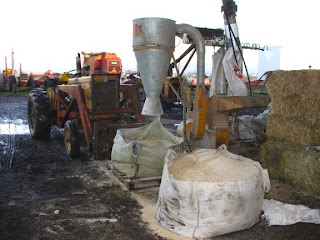 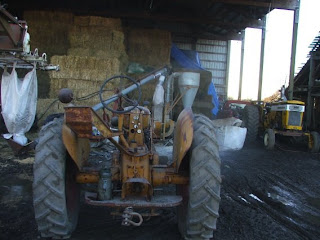 I really do have a lot to do this winter. But, I have trouble with winters. Last few years I have had trouble with the whole farming situation. Those of you who have just tuned in may not have figured out that I am not a Big Time Operator.
Anyway, instead of getting ready for summer or making a new catalogue or website for my father, (see www.lehmanfarms.net ) I have been grinding feed. You have perhaps heard of turning straw into gold. I figure basically what I am doing is turning gasoline into cash-this is at west a one to one sort of translation.
Feed prices are still very high at the local feed store, so I'm grinding up leftover odds and ends of various harvesting operations. For the last two days I've been running a mix of wheat and triticale. This should have pretty good protein. Don't know if the cows will like it. I did dump a fair amount of molassas in with the mix. Spent an hour digging it out of the hammer mill.
My neighbor farms a lot more acres than I and is quite a bit younger. He also has a seed cleaning facility. He followed triticale with wheat. Triticale (a cross between rye and wheat) tends to shatter pretty bad. The seed salesman won't tell you this. You can use this to your advantage. After combining your triticale just leave the field alone. It will sprout and with a little fertilizer you will a nice forage crop for next year. We got nearly 18 ton per acre silage off a small field managed in this way. (I do use the term managed quite loosely). I don't think this was his intention as he worked the field and planted wheat. The triticale seed and wheat seeds are nearly the same size so there is no way to separate them. Of course I found out about his problem much too late in the year to profit from it. I planted for several people who were planting forage crops this year. Dairies are short of affordable feed and this fall were trying to find spring silage crops. A couple people planted oats and peas. It sort of gets you off to a bad start if you are paying $800 a ton for seed (120lbs/acre rate) in order to plant a silage crop. However, at $5.50 a bushel, ($150 a ton?) the cost per acre goes way down. The wheat/triticale would have worked with the addition of winter peas as well. That would have added to the price per acre.
Triticale is an amazing plant. With a little extra N it will grow at an unbelievable rate. It is a bugger to combine (in my opinion) and the hay popluarity in this area has declined. I think people probably cut it too late. I know they like to do that with oats as well. I know if you cut your oats just out of bloom or even in late flowing stage, the tonnage will be down but the quality and appearance of the hay is so much better.
Anyway, I'm grinding it for feed. I keep getting a small order here and there. Sold two 50lb bags day before yesterday. Took an order for a ton yesterday, and earlier in the week sold two 500lb bags. Most of the transactions are a barter or cash. I think lots of livestock are raised on a sort of underground economy.
Posted by buddeshepherd at 9:26 PM