There have been New Year's such as this in the past. I have trouble dealing with stress. I have been feeling a bit under the weather. There are a lot of reasons for this. I took a test and I don't have the curse of Dr. F unless the test is wrong. I just feel like crap.

I thought I was well New Years so my wife and I called a lady I used to work with and we went out to dinner. We didn't stay out super late. We were home by 10 p.m. I was hoping my daughter would come over when she got off work at 9:30 but she didn't. So I set off my own fireworks. Tradition is important.

The problem is that if I ever drop my self discipline I revert to my normal lazy self. Having a job was awesome for the first two years. Insurance and 11.25 % of my wages into retirement was nice. Things have gone downhill since then. When I get sick and have to lay down and can't read a book then I start thinking of the things I seem to be unable to change. I don't have a bad life, I just took some wrong turns and I can't seem to recover and I feel like I am running out of time. No matter what I try to do I never make a cent at it and I miss my daughter.

I am not really sick today. I am just depressed. It is pouring down rain. My head hurts. I have given myself until 3 p.m. to be depressed. Then I am giving myself the only pep talk that actually works. "one foot in front of the other buddy. Get up and get on it..."

I am working on my books. This is depressing of itself. I got a lot of potential, just got to get it done. I have a great mix for pigs. Peas, Triticale, oats, and alfalfa. I should sell like crazy since the local farm store is at .40 cents a pound for 16 percent hog grower.

In other news. I have been sort of obsessed with old audio. I sold a turntable. The guy I sold it to keeps sending me photos of it with various albums he loves. I think I sold it too cheap.

I dug out one of my reel-to-reels. I have a couple boxes of reel-to-reels I have acquired over the years. Most of them are total crap. I always had this image of reel-to-reel guys as HiFi aficionados who crafted Dave Brubeck tapes so save their records. Actually reel-to-reel guys were cheap arsed old dudes who crammed as many hours of the worst easy listening music as possible onto one reel because they were too lazy to turn over the record.

I found the tapes I made years ago. I bought the reel to reel from the radio station at my college. I didn't have a cassette recorder. I listened to some pretty random stuff. Los Lobos, Ziggy Marley, The Tailgators, The Cars. It is kind of interesting.

I got a text from the President of the University I work at. He spent New Years in Dubai. He has a boundless supply of energy. Not sure if it is inspiring or annoying.

Have a great year! 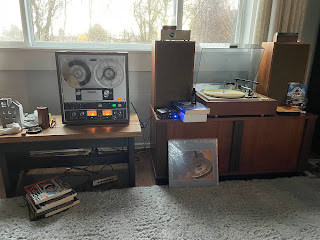 Posted by buddeshepherd at 1:57 PM