The problem with vacationing

I know the title of this blog is the Lazy Farmer. It is true that I am lazy. Perhaps too lazy to actually take a vacation.

My hero is the original Lazy Farmer who was featured in farm magazines of the 1950's. He would not take a vacation. He was a worker! In that spirit, my goal as a Lazy Farmer is to avoid work. My ideal is to sit next to the wood stove on a winter morning with a cup of coffee and read Farm Show Magazine. My other goal is to have my wife get a good job so that I can sit by the wood stove on cold winter mornings and read Farm Show Magazine with out "Mirandy" telling me to get to work.

That has not happened in my life and so I do feel like I am a bit of a failure. I have had a lot of cracked pot schemes. No-Till planting, Non-GMO pig feed, Selling the original stock of Slik Toy tractors. (Still have several boxes), hemp, hemp pellets, pellets in general, hemp tonic, and 55lb wheat straw bales to feed stores and the latest and most ill conceived scheme of all- Being a Groundskeeper!

All of these schemes boil down a sinister conspiracy to keep me away from my rocking chair and a nice warm fire.

My lovely and gracious wife, who we shall refer to as "Mirandy" for the purposes of this story is a determined woman.

Mirandy alternates between encouraging me to work harder and worrying about me working too hard. Three years ago I declared a moratorium on vacations until our trailer manufactured home was paid off. However, I gave in. Mirandy was of the opinion that I either needed to up my life insurance, go to a doctor and get diagnosed for sleep disorders, or go on vacation. She was so sincere I agreed on a vacation. Mostly because that vacation was three months away from the time of the discussion.

Three months have passed and now I am on vacation. We are in Bend, Oregon. We are on our way to Burns Oregon. I am going to attempt fishing. Also, there are hot springs involved and a ranch. I like the idea of hot springs in the same way I like the idea of smoking hemp and listening to Willie Nelson all day. It is great to have goals but often achieving those goals is a bit of a disappointment.

We were going to visit a cousin in Bend. In fact we allowed time for the visit. However, I neglected to call the cousin and we went to GoodWill instead.

Earlier we had lunch at the place in Sister's Oregon with a large stuffed dead Black Angus on the wall. There was also a bored looking Buffalo and a rather irritated looking Coyote on the wall. 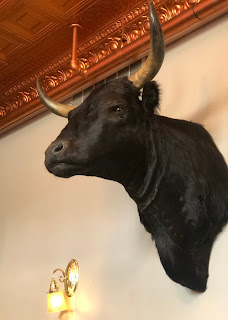 My wife found half a drywall screw in her French Fries. It was the non-pokey end and she didn't actually eat it so alls well that ends well I say. 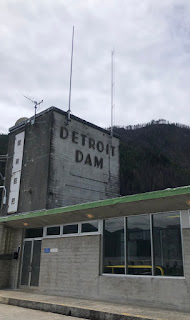 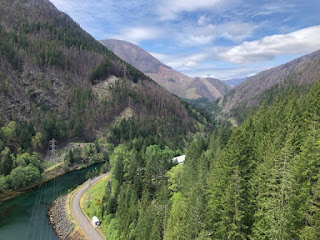 I really am not sure what a person should do on vacation. If my daughter were still age 10 then I can think of all sorts of adventures. I kind of just want to read a book... 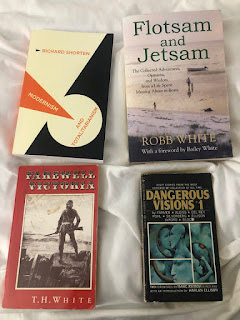 Choices of Books to read on vacation...

2. "Farewell Victoria," by T.H. White. I'm sure that will depress me. End of Empires and God, Honor Country, and all that. Then I will start ranting about the idiot professor at work who has a degree in Post Colonialism, ok really?!!! There is a degree in drivel and you can get paid to teach drivel and no one knows why small private colleges are now irrelevant. I guess the gullible blue-haired girls need something to care about... I suppose I should not have read "The Once and Future King," at such a young age. Might does not make right, Ignoble means are not justified by a noble cause. Lancelot should not have been tapping Genevere, but Morgan LeFaye was hot. I would totally have gone for her..

3."Modernism and Totalitarianism," by Richard Shorten. I started to read this to argue with my Workstudy girl who was taking a class in Nazi/Facism but it turns out we agree on most everything. Her family is hispanic and they work hard for their living. She is not happy with the BS she has to be subjected to in the Linfield College of Arts and Sciences but figures that is what she has to put up with to become a nurse. I try to encourage her. Doesn't like to be called "Latinx" No real Hispanic person likes to be called Latinx. It is kind of offensive. I haven't figured out why yet. I think it is the male/female tenses.

4."Flotsam and Jetsam," by Robb White.  He wrote some of my favorite books from my youth, "Up Periscope," "Torpedo Run," "The Lion's Paw."

But now my "Mirandy" has returned and I must concentrate on my vacation.

Have a happy day!

Addendium: The TV is on. What the heck is wrong with our Government. Declares the border open and then when refugees from the L.......d College of Arts and Sciences favorite socialist dream country show up and want asylum the border is closed. But it maybe it is open. But then they deny people are being kept in cages. Liberalism is a mental disorder.

Also... People won't go back to work because of all the Wu-Flu money. I suspect the only reason the economy is still work a crap is because people are secretly working for cash but also collecting COVID bucks. It is the private economy that is the only thing keeping us afloat.

And Now we shall pack up and hit the road. I shall catch a trout, club it to death, and I shall cook it with lemon and butter. Or I shall burst! Goal Setting is Important!

Posted by buddeshepherd at 10:52 AM