We are trying to bale our third cutting of alfalfa. I waiting for what I thought was a nice long stretch of good weather and now it is going to rain. We have not had a hot summer and now we are looking at a week of showers.
The second cutting was not that great and even though we watered this stuff three times it just didn't yield like it should have. It has been down since last Tuesday and I fluff it up everyday. I raked the first 10 acres late last night. It was something like 55 degrees out and the leaves were still dry and breaking off. I of course used the open tractor and I had no coat. I was cold.
I talked my neighbor into buying a hay fluffer. It has ten or so rake wheels set at a slight angle. You pull it 20 mph with the pickup and it just kind of lifts up the alfalfa and fluffs it. It doesn't knock off the leaves too bad.
The annoying thing about this all it that you can still peel back the alfalfa stems with your thumbnail but if you twist a hand full three times most of the stems break. 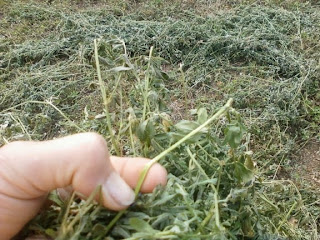 The photo above was taken on the third day. There is obvious stem moisture here.
As I said earlier I have been fluffing the hay every day. I usually just cut it and ignore it for three days and then fluff it early in the morning with the dew on it. We have been getting such a heavy dew it looks like it rained and it really bleaches the alfalfa.
This is the view out my rear mirror at 20 mph. 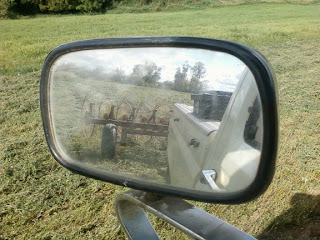 This is a before and after shot as I'm running the fluffer. 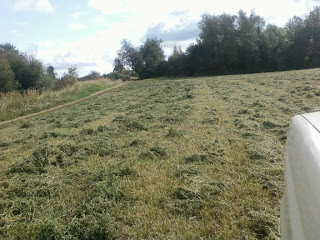 Then I double rake it into one windrow. I am going to rake it again after dark tonight. I might be able to bale. I checked it this afternoon and the moisture tester read low, but it was knocking every leaf off the stems so I quit. 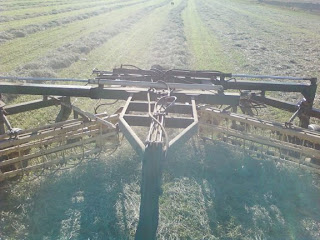 Tomorrow morning I will turn it again or perhaps use a different fluffer that just lifts the windrow up in the air and sets it back down. Then I'm going to just get it baled. Tuesday it may rain.
We also have 10 acres of Teff hay to bale. It is pretty pathetic this year. It is an annual hay crop which gives you two cuttings under good conditions. The planting was delayed because of rain so 50 days till the first cutting put me right into the end of August. But, it didn't grow. So I'm thinking it will yield about half a ton per acre. It is going to get a shot of weedkiller and then I'm going to no-till the field to annual ryegrass. Actually I think I'll no-till any ground that won't grow wheat into annual ryegrass, wheat into any dry ground even it there was wheat there before and see what happens. I think we will plant another 20 acres of alfalfa if possible and perhaps some timothy. I'm not sure where to put it. But, timothy hay and alfalfa hay are the only things that are selling right now.
Update: It is 11:30 p.m. and I just finished raking the alfalfa. I tried baling at 9:30 but it was already too wet. It went from leaves crumbling to 24 percent moisture in probably a half hour. I will try again in the morning I suppose...
Posted by buddeshepherd at 7:49 PM