We watch brave deputies subdue 100lb girl. Will they put her face into the hood or drop her?

They dropped her.
I hate dislike cops. I know criminals are worse but you kind of expect it of them. Cops are supposed to be a cut above. Sometimes I forget that cops are all arseholes. But, I get reminded every so often. I know that the hero of Frank James book would not have dropped a 100lb chick face down into a plowed field but he only exists in a book. (And now I see the book is no longer online, it was a good cop adventure, with terrorists, a hot chick, explosions, and farm equipment...perhaps it will be a movie someday)
But, I digress.
Now, I could see the Amity cops using the tazer on her but that is because she outweighed the skinny cop and could outrun the fat cop and it would be either zap her or shoot her or let her get away.
Let me tell you what I saw...
My neighbor came and got me for lunch. I've been plowing and it kind of drives me crazy-being a die hard no-tiller and all.
So we are driving the long back road into town and we see several sheriff cars have pulled over a smaller 4wd pickup. The sort local kids drive. We put on our seat belts, just in case. We are trying to figure out if it has anything to do with the truckload of straw parked at the side of the road and we see this kind of skinny girl standing in the field with deputies surrounding her. I say something like will they drop her in the field or put her face into the car hood-sort of as a cynical joke, and we see her go down. Face down into the plowed field. We were not that close so I don't know the details, perhaps she said a bad word and the deputy felt threatened. It looked like they dropped her, put a knee in her back and attached the hand cuffs, and then lifted her back up by her arms.
When we went by they were putting her in the car. The side of her face was red and scratched from hitting the wheat field. The deputies were pretty burly so I'm sure it was a pretty serious threat.
Of course if you would make a complaint you would find out that she was trying to elude, or threatened the cop and it was all really her fault. They've got rules and procedures for dealing with all of this-rationalizations in case, heaven forbid, officer should feel a sense of responsibility for beating up a chick.
So, all of you who want to defend the deputies, just think of a few things you do that are illegal. Or what things that you do now will become illegal in the future. What if you defended yourself and when the cops showed up too late, they decided to arrest you? What if you ran the disk over an endangered species?  Would you want yourself or your wife's head slammed into the hood of a patrol car? Well, after all you did break the law. I mean well, you shouldn't have broken the law, and then you got angry when the cop was just doing his job.
You may think it is funny when it is tweekers and brown-skinned folks getting roughed up a little-but it wouldn't be funny if it were you... 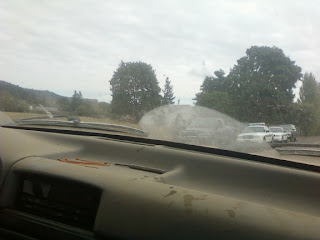 I didn't get a very good photo as the phone has a delay before the shutter snaps and we hit a bump. Looks like the dash is pretty dirty...
Posted by buddeshepherd at 11:02 PM