Sunday afternoon and we play with Johnny West action figures

I've been threatening to sell my Johnny West action figure collection. The Johnny West "action figure" (not a doll) was produced by the Marx toy company in the mid 1960's through mid 1970's. See this collector's page for more info...
My daughter wanted to play with them one more time before I sold them. So we got them out after church. My wife was attending some art teacher training and so was not around. It was just Sadie and I.
Well, I don't think i will be allowed to sell them anytime in the near future. They had some major adventures. Several were injured, a couple got sick, two went to jail, one may have gotten married (to Barbie), the Indians turned out to be cannibals and ate one of the knights and Sam Cobra broke out of jail, stole a lot of money and is hiding under the plant stand enjoying his loot. 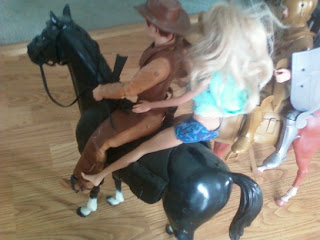 It appears that Barbie is spending the night in the Big Jim camping tent with a couple cowgirls and perhaps a cowboy or two. I think the knights ended up in the hospital. 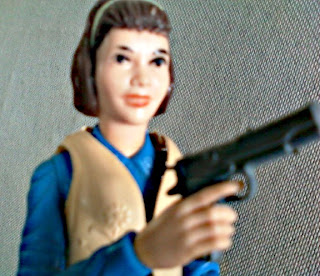 It is very hard to play responsibly when their accessories are mostly firearms. I really tried hard. The daughter had to set me straight a few times.
I think those characters do have a mind of their own... A lot of Girl power here...

Posted by buddeshepherd at 11:22 PM