Sunday At Bradenton each

It is a cloudy Sunday Morning at the Dream Inn. We are a little low on towels. My wife did ask for more towels which caused some consternation. Apparently people steal towels cause no one has enough cheap threadbare hotel towels in the bathroom at home.
So my wife pointed out that she had in fact turned in four towels and then the nice lady counted the towels and sure enough, four towels.
They didnt have more large towels so we got hand towels.
We found a GoodWill and were going to buy more towels but there seems to  be a towel shortage on Anna Maria Island. Who would have thunk...
Perhaps we should just mail them a care package of towels from Oregon.
I should not complain. It is cheap and we have an excellent view. And did I mention cheap?
Yesterday I read Phillip K. Dick's, "Do Androids Dream of Electric Sheep."
I used to enjoy Science Fiction. Now, the smug post WWII view of the future just seems obviously preachy and kind of juvenile. Kind of like reading my Facebook feed.
I actually laughed outloud went the Hot Android threw the hero's goat off the roof.
I kept thinking of the very rude and offensive joke where the punchline is, "a good goat will do that."
Later in the morning we walked around the trailer park across from the hotel. It is old and funky. License plates from cold states. Several were from Ontario Canada. There was even sign with an arrow pointing towards Canada.
And NOW... TO THE BEACH, in the rain. Just like home only not cold! 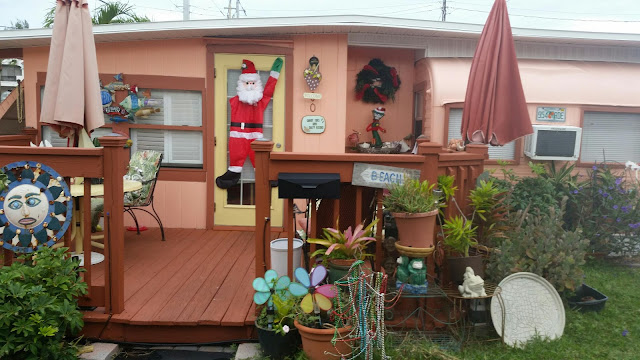