I've been worried about the tractor that Orin should have. I'm starting to think perhaps it would not be nice to give it to him. I'm thinking the whole misadventure was a mistake.
When it gets to 70 degrees outside, when I run it wide open around 2,200 rpm, when I have a long steady pull, it starts to knock. It sounds like it is coming from the top-end. If I idle down a little and/or shift down a step, or if I stop for a while and let it cool down, it quits knocking. The temp gauge rarely goes over 165 degrees, but it does climb to 170 under a heavy load.
So, I went to plant Monday morning and as I was checking the oil level and also wondering where all the oil that runs down the side of the engine was coming from, I found this... 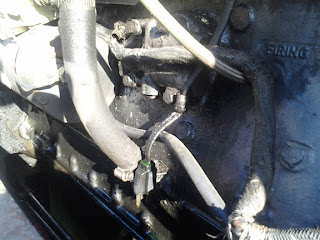 Antifreeze on the side of the block.
I checked the radiator. It was a gallon low, it holds like eight gallons so that was not really a problem. There was a film of oil on top of the water. When I filled it and then started the tractor antifreeze started running out of the drain. I got a good pint out of it.
I took the radiator cap off and let it warm up.
Periodically I would get a large bubble. Not the usual little tiny bubbles that I've noticed with a bad head gasket, but every couple minutes one big bubble would come up.
I don't know...
Found a running Army Truck engine in Round-up MT. Just need to change the manifolds, turbo, oil filters, front cover, and injector pump. Or I could buy a school bus and put an 8.3 cummins in it. Or I could paint the hoods and swap the new tires and put it on Craigslist, or I could take my wife's advice and move to Panama City Beach.
But those are long range plans.
In the short range,
I dropped down a gear range and ran in third high instead of fourth direct. Monday was a little cooler. It didn't knock so bad. Don't think it used a gallon of oil like I did Saturday.
I planted 55 acres. It was not too bad a production rate as I had to load thirty-eight bags of peas into the drill every 11.3 acres.
I found an IH truck for Ralph. It is a nice one. 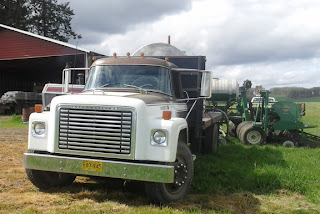 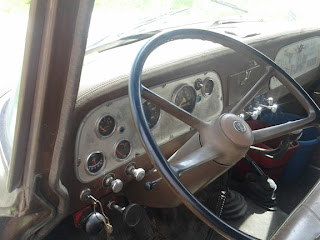 In a side note I like planting much more than baling hay. At this point I only plant for people who I know. Almost all of them have been friends in one degree or another, or at least the sort you wave at when you see them in the field. I'm usually helping them do something they can't do, or don't have time to do themselves, generally they are happy.
Baling hay is always a struggle, people seem to think they are in danger of getting ripped off, it is hot, it might rain, I have to deal with employees....
And now I am going to make some pig feed.
260 acres done, 150 acres to go. Wish I had another 500 acres, need the money for a new tractor...
Posted by buddeshepherd at 7:08 AM