We go to the zoo, have dim sum, ride the zooliner, see caged animals pacing in circles and going insane from boredom...

Sunday we did not go to church.
Instead we went to the big city and had dim sum at House of Louie and then we went to the zoo.
I will digress a bit on the House of Louie subject. It is my nearly favorite Chinese restaurant. If you click on the link above and read the review you will find a terrible review.
I linked to that review as it is an example of the "bad tourist." Or people who do not take into account the context of their surroundings or something like that.
On the contrary I say! House of Louie is a given. The food is never bad. There have been incredible Chinese places that have come and gone but House of Louie has always been a safe bet. I've never had bad food there. It is one of those institutions that make Portland interesting. (If you really want interesting as opposed to quality, try the Republic Cafe.)
Over the past few decades I have patronized the House of Louie, the state of repair and general cleanliness has varied, but the food has remained pretty decent. No, it has not always been in perfect condition. It is an old restaurant. The old vinyl booths sometimes have tape on them. (Mine did Sunday.) But it has good basic Chinese food and it serves dim sum. On Sunday mornings after 11 a.m. they wheel a little cart around and offer you things you can't remember the names of. AND every once in a while they come out with chicken feet. I thought that was just the Mad Magazine version of Chinese food. But, no! You can get it at House of Louie.
AND so what if all the waitresses don't speak English very well. I always wonder if one day the one who has been there forever will just rattle off some phrase in perfect Oxford English but I suppose she won't.
The House of Louie is one of the remaining institutions of the old Portland. The Portland that was weird because it was a buffer between the city and the country and hippies and bums and immigrants and working class and smarmy intellectuals and slackers and damaged war vets and every once in a while a few just plan ordinary people. The self-consiciously weird Portland of the Sam Adams era makes me on edge.
Plus it is right next to the flaming gay bar which inspired our first discussion with our daughter about "alternative" life styles. "Mom! That is not really a girl! Is it?????"
"Honey, some people are confused, especially in the city..."
But, now I have digressed...
We had dim sum and I had too much pepper in the hot oil and soy sauce mixture that I stirred up to dip the funny puffy things that were stuffed with shrimp. I never remember what anything is called.
We left quite stuffed.
It always seems like the carts come by really fast and you just keep pointing at things that look good and then you eat too fast because you want to try what is next. I must learn to not do that.
ANyway!
On the way to the zoo we stopped to pay homage to the birthplace of MuddyValley and to show our daughter the bridge where star crossed lovers in Portland have traditionally leaped to their deaths. 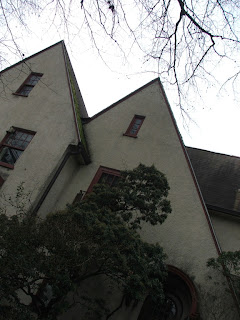 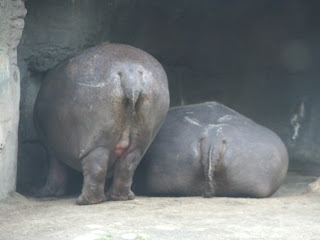 Sort of a rear view here...
We saw a cougar eating a calf. Which seemed somewhat ironic to me. They have the cougars and wolves next to the farmhouse exhibit. If that is not intentional then it is somewhat humorous. The keeper explained the calf was a donation. We could hear the bones crunching.
We also saw lions. 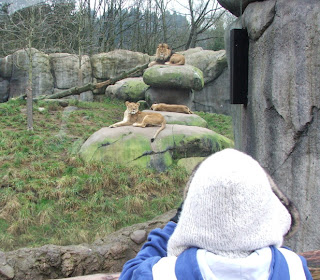 And found an empty cage full of rat traps. I'm sure there is a story behind that. Is the zoo infested with rats and if so why not just put the hungry looking bobcat in the cage? Pretty funny... 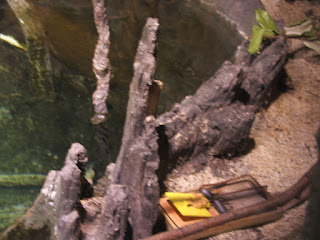 AND Then we rode the Zooliner! I like the Zooliner. I think it is powered by a Detroit Diesel of some sort. It sounded like a detroit when it was idling. Probably not, probably some highly ecologically refined diesel engine with zero emissions and radiating rainbow stickers and carbon credits. 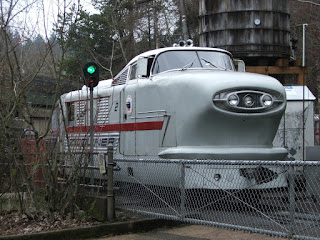 The train ride went up to the famous rose test gardens. Not so much to see in the way of roses in February. Nice ride all the same. 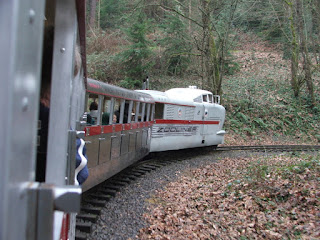 And my daughter took lots of pictures... 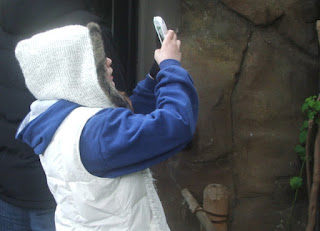 So a good time was had by all.

Now that I have killed an hour of work I shall go to work. Have a nice day...

Update at 10:45 a.m.
Hot oil- We like to mix the hot chile oil that is in the little glass pot on the table with soy sauce and dip the various morsels in it. It also makes pork fried rice much more edible. Should you get a little carried away with the Hot Oil you may find some distress the next morning. I do not recommend loading hay first thing in the morning on the day after. I think I shall sit a spell and look at fertilizer spreaders or Craigslist or pursue the ever elusive good deal on a Ford LN8000 with 671 detroit.

Posted by buddeshepherd at 9:08 AM