I hide from my neighbors and I start building a plinth.

I'm a little bleary this morning. I started reading a book about a WWII fellow. (The book "Crossing the Line," mentioned yesterday, see my Amazon wish list) When I get started on a good book I tend to not stop. I had to quit at 11:45 when for some reason the type became blurry and the dog started barking. I suppose there is no connection.
I did not feel like getting up this morning.
Spending money, or rather, thinking about spending money always makes me tense. This whole time of year when I suddenly realize nothing is even close to being ready from spring, and it is February gives me that sense of impending doom that really makes farming so enjoyable.
So I picked up a sheet of hardwood plywood on my way home from ordering parts. I am thinking of building a new plinth for the Dual 1019.
The Dual 1019 seems to benefit from a dense base. It is an idler drive turntable with a spring suspension. I have a United Audio base and a plexiglass cover which does not fit correctly. The point of a new plinth is so that I can actually put the cover on the turntable without knocking the tonearm out of adjustment. Oh, and it should not make it sound worse.
I needed a type of hardwood plywood like baltic birch, which is made up of layers of hardwood rather than having soft wood on the inside and plywood on the outside.
I found a sheet of 3/8" Maple which had a very thick top layer. For some reason I imagined it had the Maple on both sides but I was wrong.
I should just go to a woodworking shop but I trend towards the off-the-beaten-path discount building supply places. The owners are much more interesting.
After a frustrating day of attempting to get a wheel made, looking at good deals on big trucks which I was not smart enough to take advantage of, discussing ways not to make money in farming, not being able to find a loader to load the hay I was supposed to haul, not getting chicken feed made, and not helping my wife finish the fake hardwood floor we are installing, I decided I needed a break.
I was going to install the fuel tank my brother found on ebay for our 1967 M670 super, but I suspected a leak. It was kind of funny, the package came UPS and reeked of gasoline. I kept imagining all those pictures in the Post Office of thinks you can't ship. I suppose tractor gas tanks are on that list? 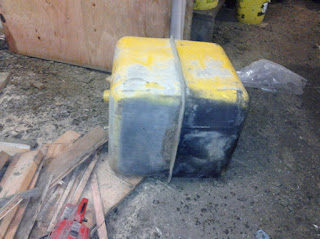 But we were out of air and I couldn't turn on the air compressor as I have lost my keys. 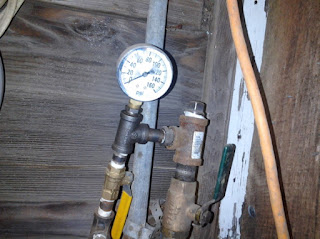 So, I decided to go to work on the plinth.
Here is a previous version made with a chainsaw. I plan to layer plywood to make a solid base. This was sort of a test version which allowed me to get at the workings of the turntable. 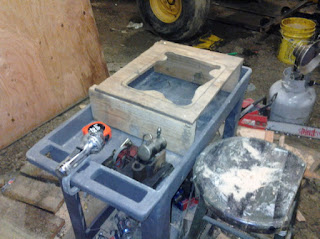 But, no skillsaw. To get the skillsaw or use the table saw I would have to annoy my wife. It would not be right to use the saw for a project other than fixing the floor.

(Excuse me but Jose is riding around the house on the 4-wheeler he thinks my brother should buy. He must want something. I don't claim to be a hard-working farmer. I think people should not annoy me before 8 a.m. I have to go shut the blinds...)

I return...
So, I figured if George Washington can cut down a cherry tree with an axe and go on to become president, I can cut out a turntable plinth with a chainsaw and go on to become... well, I don't know... Something else... a Lazy Farmer.) 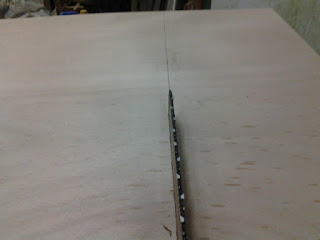 The key in fine chainsaw carpentry is to 1. Get the saw straight, 2. Not chip the wood.  For precision work I clamp a 2x4 alongside the saw. I didn't have a 2x4 but I found a non warped 1x6. One must adapt.  The chain must be sharp. I don't recommend the skip tooth chain I was using to cut oak. 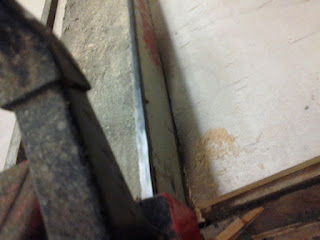 Oh Crap, the neighbors are in front of my house. Jose is revving up the four wheeler and his boss is also there. They have come to help me haul hay. I have got to buy my own squeeze. If I wanted to be a successful farmer I would get up at 4 a.m. and go to work. What part of lazy do they not understand!!!!!!????
I have retreated into the bathroom and turned on the fan. Hopefully they will just go looking for my brother who I am sure has returned from a week of driving truck eager to go to work!!!

They are still circling the house, I gotta go to work... More on this later.

UPDATE: Well it turns out that their cows were out. So now I am a shirker as well as being lazy. It is considered bad form to hide in the bathroom when someones cows are out. Perhaps he does not read this blog. I may have to delete this whole post.
Posted by buddeshepherd at 8:23 AM