A rambling narrative covering the last couple of days

Yesterday... or was it the day before?
It started out good. My wife brought me a package from the post office the evening before. It was my latest purchase of albums off of ebay.
The problem with this is that I bid or place snipes on a whole list of albums I want to buy. I always get outbid on the ones I really want. I missed two Jimi Hendrix albums and a string blues album Monday.
I have been buying albums from wstein55 who seems to have an endless supply of somewhat interesting and in fairly good condition albums which sell for the $2-$4 range.
This is a deceptive problem for me. You see I swore off cheap interesting albums from garage sales a year ago. I don't need any more medium quality albums that I'm only going to listen to once. I need a few more really good albums in different genre's. Preferably string blues. These are more collectable and worth more money. I do not need to buy a Flying Burrito Brother's album that doesn't have Gram Parsons on it. Even though it was a good album. I really should not have bought a Hank Locklin album with one side that sounded unplayed and the other side that the owner must have left on the record player for five years. (nothing against the fellow I bought it from!)
And now I can't buy anymore because I used up all my paypal money on records, 16mm cartoons and lego train parts.
(Feel free to buy me anything that looks interesting off of wstein55's current list of albums.) 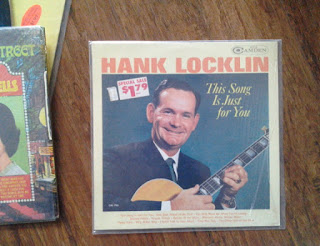 To continue my rambling commentary....
I was standing in the driveway staring at the mess of mud and wondering if I continued staring at the bin full of barley if I would turn itself into pig feed, when I heard the sound of a diesel motor moving slowly down the road.
I turned my gaze towards the road and saw a grain bin suspended from the upraised forks of a hay squeeze trying to fit under the tree in front of our house. I think it was taller than 14 ft.
I quickly realized it was coming to my house... 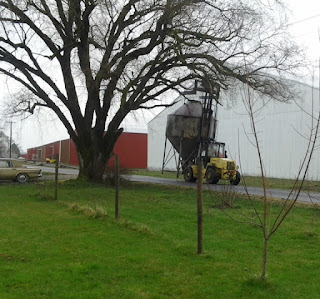 My neighbor thought I needed it. (I will actually have to pay for it at some point in time.) I shouldn't refer to it in singular as he came back with another one... 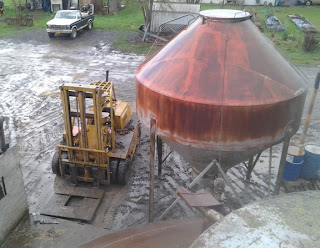 I suspect I provide a lot of amusement for the neighbors. I hope they are laughing with me and not at me.

I spent the rest of the daylight hours trying to free up the augers in the bottom of the bins and not being entirely successful.
In the evening I set out to complete my task of welding a ball hitch assembly up for the rake.
I discovered the tubing I had decided to use let off some sort of toxic fumes when heated and I think I gassed myself.
Then to add insult to injury I welded it wrong. 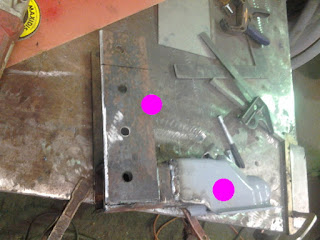 See the purple dots?
They illustrate where the hitch should have been welded.
Did I tack it and test fit it? No! I welded that sucker solid.
I think I am going to cut off the top three inches and weld it onto the bottom.
Yesterday I spent loading a semi load of hay. 784 bales loaded in 10 blocks. My fingers were so cold from running the levers on the ancient towmotor squeeze that they were numb for two hours.
I don't really remember what I did the rest of the day.
Running around getting parts, delivering chicken feed, and something else. Oh, I went to an electric motor shop and where the fellow had a set of Dynaco A-25 speakers hanging on the wall. Kind of funny to see. They were not in real good shape.
And now....
Off to work I go!
Have a nice day...
Posted by buddeshepherd at 7:30 AM