Why I don't play the lottery

I have kind of bad luck. Not the sort of bad luck where things continually fail, but rather go sideways.
Now I guess there is no such thing as "sideways" luck but if there were I would be the poster boy.
Saturday I spent the most of the day grinding feed. 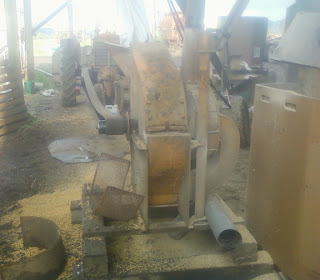 My feed grinding operation was a kind of a clever plan. I have a handful of dedicated customers.  Strange thing is that people keep calling me out of the blue saying they saw my ad on craigslist six months ago.
The thing is...I don't get any big customers. My one customer that buys a ton at a time for his pigs somehow got 1000lbs of chicken feed instead of pig feed and i ended up selling him the next ton at half price. I gave his daughter a toy minneapolis-moline tractor also. She said she liked tractors.
But, I digress.
My sideways luck soon kicks in. If would have been bad luck to sell him the wrong feed and have his pigs die. It would have been good luck if he would have ordered six ton. Sideways luck means he things I am a great guy and will buy more-but pennies from heaven it is not.
We sold all our hay for a reduced price. The people are taking the bottom bales and two year old stuff. They paid for half of it already. Bad luck would be if the check bounced, good luck would be if they paid for it all, sideways will mean that something will go wrong with the last payment.
I got a good set up for grinding feed at last. The M670 loader blew a cylinder on the loader, the M-5 has a bad knock, and the Jet Star won't lift high enough. But, I found my $25 auction special loader and hooked the hydraulics up to the old GMC truck with remote outlets I got for free and I even had an electronic flow control that was miss-labeled and I got for $50 on ebay. 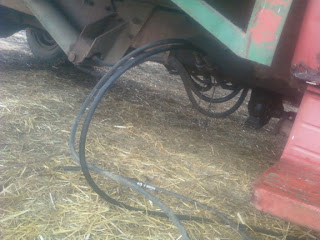 I was able to dump the truck into the auger and then regulate the auger speed with the hydraulic flow control. 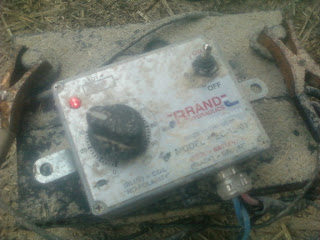 The bed was low enough that I could dump boxes of oat and wheat screenings into the truck load of barley and have it nicely mixed going into the hammer mill.
So then the people showed up for more hay. I had to move all the feed trucks out of the barn. Then it rained.
I finally got going again and things were working great.
Then...
The fan on the 1939 model Z moline flew apart busting the fan pedestal and putting the fan into the radiator.
I went and got the U and finished my box of feed and then i quit. It was 7:30. I went to bed early...
Where I am I going to find a radiator for a 1939 MM Z? I don't have time to repair an antique tractor I only use for raking hay and grinding feed. I don't have $600 for a new radiator. I can't afford a $6,000 feed mill. Why am I even grinding feed? Any other farmer in the neighbor hood would have spend $20,000 and would have lots of customers and probably a sustainablity label and would have been featured as farmer of the year somewhere, cause they are just to wonderfully innovative. Value added and all that!
But, once again I digress...
The point of the post was why I don't play the lottery. It is not that I will become addicted. Part of the reason is I don't want to give up my hard earned money to be wasted. Mostly it is because I know I will never win big. This is what would happen. I would win just enough to be in the papers and have people bug me, but I would never win enough so that I wouldn't care. It would go sideways...
Posted by buddeshepherd at 8:51 PM