I attempted to plow 10 acres. I was unsuccessful. It absolutely poured. You would think I could plant a measly 10 acres of alfalfa.
Some Ethiopians want be to plant Teff for them. I got advice from the fellow who sells me Teff seed. He said get the money up front. I said I wanted $500 an acre up front to put the pow in the ground. Already the problems have started. They don't have enough seed. They mix sand with the seed as the seed is really small. I've been planting Teff for the past five years and I can set my drill down to 3 lbs per acre. The problem is that is has so much down pressure it buries the tiny seeds too deep.
My plan is to plant the Teff with the Alfalfa. Teff is an annual that frost kills really easy. It requires a lot of water but so does the alfalfa. Hopefully I will get a Teff hay crop. The Teff will winter kill and I will have really good roots to keep the alfalfa field from washing down to Portland. 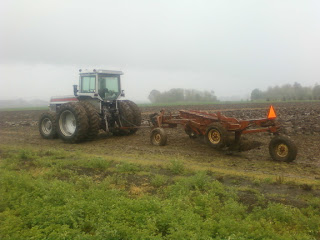 Whether the Ethiopians want to eat the seed or cows want to eat the hay I probably still planting the stuff. It would have been nice to get $500 an acre however...
Posted by buddeshepherd at 8:10 PM