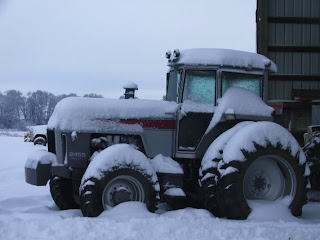 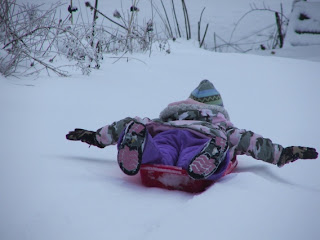 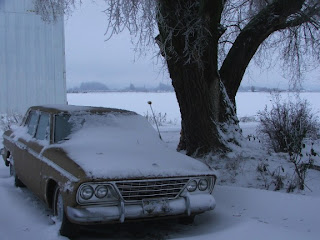 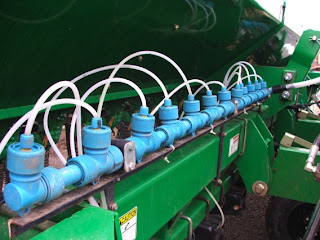 We had snow.
I just downloaded the photos off my camera. I ordered some fertilizer parts for my Great Plains drill. I am such an utter scrounge. I put liquid fertilizer on my Great Plains 1500 drill. After paying an unmentionable sum for this same drill this year. (A story of its own) I decided to scrimp on adding the liquid fertilizer. Mainly because I had NO money left. I knew that the LBrothers Shop used to sell the Blumhardt liquid fertilizer system. I actually found one on a drill that a friend of mine bought used. It is pretty cool, instead of a spray boom it uses individual fittings that all screw together kind of like an erector set. And I got it for free. And there you have a photo of it! So, anyhow, I found out the company was still in business and called them to see if they made a special attachment to put the fertilizer down between my double disc openers. Right now I'm just using nylon drip tube with I've zip tied to the seed flaps. This is not so precise and not so durable. I of course became confused and tripped over my words and terms so I'm sure the folks at Blumhardt thought I was an idiot, and of course I got the wrong fertilzer tube. So I took pictures of the whole set up and emailed them off to Blumhardt this evening.
Which brings me to the White Christmas. We haven't had one of those in Oregon for a very long time. We had a good two weeks of snow. We had a little over a foot here at the farm. Folks up in the hills had four feet. I'm going to have to make the long trek to Gopher Valley and look at my hay shed. Four feed of snow is a lot of wet stuff on my hay.
So here are some photos. Sun was not out and I didn't adjust the white balance on my camera. Should have used film. Could have done it with film. But it was a dark and gloomy week. The snow just kept coming down. Studebaker photo is early in the week. White tractor photo is probably Christmas day. I see freezing rain on the windows so it would have been near the end. The snow is pretty deep on the hood.
I spent the time doing some serious sledding with Miss S. I took the blade to the hill one the road going down to the river bottom. I packed and graded a mini bobsled run. We had a pretty good time I must say... Although my extra weight on the sled resulted in an increase in speed with put a little out side on the turn which meant- through the fence and into the black berry patch. Miss S. was a good sport and helped her aged father back up on the road!
Note: Pictures are all out of order. I'm betting anyone clever enough to find this blog is clever enough to figure out what I'm talking about...
Posted by buddeshepherd at 10:15 PM