I spend actual money in a record store and feel foolish

Yesterday the President of my humble college issued an edict declaring no work after lunch and we all were sent home with pay.
I had a few things to do like put my meager pay check in the bank and pick up a pizza for supper.
My plan was to play pinball most of the afternoon and then pick up the pizza and go home. However, now that I am fifty-&*(^%ing-old, playing pinball all afternoon does not calm the nerves like it once did. Plus, I have a CDL and I don't feel like drinking Pepsi by the pint glass and I can't even sniff mouthwash without being subject to a driving under the influence.
I suppose I could have talked a workstudy student into accompanying me but that just seems weird. I saw a former helper/workstudy kid walking home and invited him home for Thanksgiving but he declined. He said he was going to have a pathetic Thanksgiving with his three remaining Frat brothers at the weed friendly fraternity on campus. It also might also be because I noted he was certainly looking good when I invited him into my car. He was wearing a bandanna and silkish rainbow hued harem pants and playing with funny juggling balls with string things on them that he spins around his head.
He made a comment about ass, grass, or gas, and I responded with, "Hey, nobody rides for free..." He seemed cool with that.
Well, he did look sorta cute...
But, I digress...
I gave him my lunch and threw in three beers which I had found in a flowerbed earlier in the week. He was looking a little skinny. He was very happy about the Thanksgiving bounty. He said he was going to use my carrots in his stew and totally gulped down his half of my sandwich. The beer was an added bonus. He expected one can but I gave him the three left in the pack.
I can't tell that story in Church but he seemed genuinely touched by my good will and this ain't exactly Church...
I cashed my check and headed back into town to straighten out my insurance defugalties. I texted my insurance agent who said her helper was in the office. She wasn't. So I ordered the pizza.
Which reminds me of a little story.
I was trying to enrich the word power of a workstudy student. He wanted to know the difference between a defugalty and conundrum. I suggested that a metaphorical example might be if he could picture sitting on a mower and really had to go poop but the restroom was far away. So you were sitting there wondering if you should just poop yourself or hold it in till you go blind. That is a conundrum and both of those two solutions would result in a defugalty. A couple days later he thanked me putting my explanation into "real world" terms that he could understand.
But, once again, I digress...
To kill some time I went to the local record shop. The owner makes me a bit nervous as he always looks at me intently and never seems to recognize me although I've patronized his shop off and on for at least a decade. Of course I seldom buy anything although I once found a pristine copy of the Blue Ridge Rangers for which I had been searching many years.
I was looking for the Kinks album that has their greatest hits excluding "Dedicated Follower of Fashion" or that stupid one about their cousin. The Kinks really have some horrible songs and like only five awesome songs. Sort of like the idea of if you shoot the shotgun often enough you are going to eventually hit a duck school of song writing...
And then I saw a tab for Mudcrutch!
There in front of my confused little eyes was a genuine Mudcrutch album. I put down the demo copy of "The Fabulous Thunderbirds" first album and looked with wonder on Tom Petty's first band. This would have been recorded during or after his groundskeeping gig at Florida Sate. I just assumed it was a remaster of old tapes on to Vinyl and it would be amazing. I looked closely at the cover. I read that it had been recorded in one take in 70'. I rushed to the counter. The kid behind the counter said, "whoa, Mudcrutch, their first album..." I started talking.
Fortunately and attractive girl walked in and the owner and his accolade abandoned me.
I picked up my pizza and rushed home.
My wife and daughter were home.
I restrained myself for at least an hour and then when I was requested to come help make pies for Thanksgiving I suggested we listen to my new album.
I dropped the needle on the first track and it was Tom Petty singing a Folk Song, followed by a country-western song, and suddenly I realized that this was recorded not in 1970 but rather in 07' meaning 2007.
This ain't swamp rock from 1970, this is middle aged dudes singing country music. This is not bad as it is what country music should be, but I just was not prepared. Plus, I could have bought the CD from Amazon for half the price. Heck I could have bought the CD and the record and got the songs as a Free MP3 download from Amazon and had it delivered by tomorrow if I was actually looking for a Mudcrutch reunion album.
Oh well, it is worth something to hear Tom Petty singing "Six days on the Road." He leaves the "little white pills" line in. 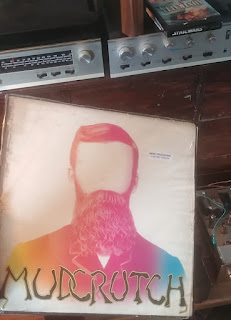 Posted by buddeshepherd at 6:15 PM