I have a Goossen bale chopper. I paid way too much money for it. I bought it to chop hay into smaller pieces to run thorough the mixer grinder, back when I had a mixer grinder, for making pig feed.
My neighbor wants one of my old silage choppers for chopping up crappy hay for his cows.
I kind of hate to sell him a silage chopper for this purpose.
It is really dangerous. The silage chopper is mean to be towed behind a chopper to pick up hay in the field and chop it into small pieces. It has rotating metal knives which clear a shear bar by 1/32 of an inch. If you run a rock or a pitchfork or a wrench or you fall into it, the results can be rather catastrophic.
By contrast my Goossen bale chopper is made to shred a bale of straw for erosion control but it also works great on hay. It doesn't cut the hay but instead shreds it. There are no close clearances. You can't really call into it.
But, I'd like to get $2,000 out of it. You can buy a used silage chopper for $500.
Whatever... 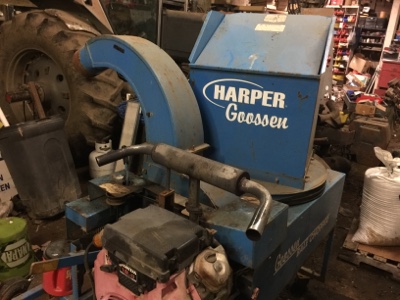 Posted by buddeshepherd at 7:03 PM