Universal Seed is the most annoying company 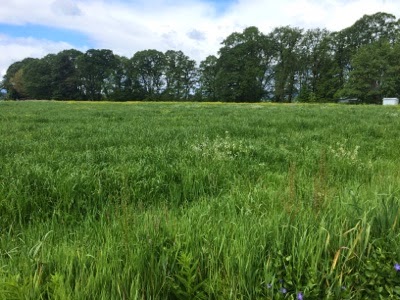 I have a little field which I usually take for hay.
It is four acres.
For some reason I have a problem with volunteer mustard. This year it has volunteer radish, for some unknown reason.
So I called my neighbor to see about loading a truck load of ryegrass straw which is stored in his barn.
He says he will if I mow my hay field which has volunteer radish in it.
His field man from Universal Seeds is upset about possible contamination of his radish crop, which is a mile away.
I'm not sure why this irritates me so much.
Universal Seed has made a lot of money by restricting production of various brassica crops.
They were in the forefront of the successful effort to ban Canola from our area.
They have a clever scheme. They find a farmer who has quite a few acres. They tell him what an awesome farmer he is. They appeal to his personal pride. In this case, they sent my friend a field man who I think is a pastor. This is pretty good as now it is God's business.
So the farmer jumps through all the hoops and when all his ground is contaminated with radish seed they find someone else.
I used to throw sunflowers into one row of the corn planter.  I like sunflowers. It made a pretty pattern. But, did the Universal Seed guy come to me and note that since I like to grow sunflowers perhaps I could get a contract to grow them? Nope, instead they told me I should not grow them.
Last year the field man gave my sister-in-law a bag of Sunflower seeds.
I planted sunflower seeds from the grocery store.

No one gave me any sunflower seeds.
Last year they wanted me to pull my volunteer mustard. I told them it was Camelina.
I wonder if I can convince them that the radish is actually hybrid flax.
But I leave you with this question...
Why should I give a rip about volunteer brassica in my field? No one has offered me any sweet-heart contracts. That nice fellow from Universal Seeds makes three trips a day past my farm and has never stopped. I think it is a little late... Where is my hat? Where is my bag of sunflower seed? Where is the offer to pay me to take a loss in yield for harvesting my field early?
Why should I care about specialty seed contracts so that my neighbor can make big bucks?
Of course I will probably do something about it because I like my neighbor, but I don't like Universal Seeds and while I would smile and nod if the field man stopped, I doubt I would grow for them.
And I tell you what, as soon as the silage is off the dairy field I'm thinking about no-tilling radish out in the middle just to see what will happen next year.
update:
So I was walking the two miles home after mowing grass at the dairy where we are chopping. Both my brother and my wife forgot to come pick me up and I do hate to beg...So I walked.
My neighbor stopped and gave a ride and complained about my wild radish. He noted that if I would have mowed my field I wouldn't have had to walk home.
I said that since I didn't plant it then it must have blown in from his field.
He told me how much money he lost from cross pollination last year.
Which is another reason to grow filberts instead of radish for his favorite company.
I say BS. Think it's a trick by his seed company to weasel out of their contact which they oversold. There has been talk of this sort of thing happening before. They would certainly never admit to selling him less than perfect seed.
Another reason why I dislike his company.
Posted by buddeshepherd at 10:07 PM