I talked to the land lady and baled more hay and the washing machine flooded our manufactured home...

Mondays should be an optimistic sort of day. The first day of your work week. You have Sunday to recharge and plan and Monday should be like the starting gate for a race or the trail head for a hike. Sometimes Mondays seem more like staring over the edge of the cliff and my rush out of the gate reminds me about the story I read of a fellow who tried to commit suicide by jumping off a bridge. He said going over the rail was a very liberating experience but it took him something like 30 seconds or more to hit the water. He had a lot of time to think on the way down. He changed his mind and lived a pretty happy life. I, on the other hand, keep jumping off the stupid bridge.
I called my landlady who seems to be in really bad shape. I told her no one would come see her with her gates shut as it looked like she didn't want to be bothered. She told me her step-grandson's dog would escape if the gates were open. She also said that one of my workers left the field gates open and deer came in and ate all the corn plants in her step-grandson's garden. I will have to take her some corn... She seemed fairly happy by the time I finished the phone call.
We are moving to a new field across a small mountain. Gorges would probably feel at home at my hay farm. I got the rake and the tedder moved and my sometimes a great helper and I were on the way for the baler when we spied a large bolt with yellow paint on the highway. It was part of the hitch for the M670 Super. So, back to Muddy Valley to fix the hitch so the tedder wouldn't fall off. Then turn around and head for Gopher Valley to get the baler. I sold some of my bad hay to locals and had to talk to my "hay broker" who is a retired fellow. I keep him supplied with hay and he helps me empty my shed. It works pretty well.
My sometimes-a-great-helper decided he needed to go and haul some of his own hay so I went back and ran the rake so Bill could bale. The baler tractor is the White 2-135 and it has good A/C. Those Kneodler seats on the old MM tractors were not made for 350lb farmers and B. looked pretty uncomfortable.
We have an old Allen V-rake which has electric over hydraulic controls and is kind of POS but has nice paint. I acquired it in a trade of services. But, it streamlines the haying. 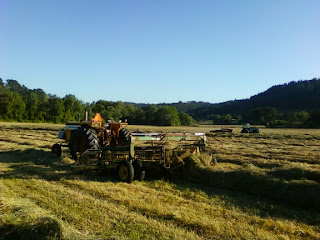 I have a system for doing over-ripe hay. I set the mower windrow narrow and I cut way ahead to stop the hay from maturing so fast. Then I totally ignore the hay until I am ready to bale. (I do check the bottom of the windrow to see if it is turning yellow.) Then we run the tedder to fluff up the windrow and mix up the bleached top of the windrow and all the wet spots in the hay. Within a couple hours we merge and turn two windrows together with the double rake. And then we bale. I try not to rake more than I can bale in a day as we get very heavy dew this time of year. With a little luck the hay will still be bright green on the inside and the tedder mixes it up well enough there are not big chunks of beached stuff in the bale.
And i have a spotlite sprayer on the tedder tractor and I spray it with molasses. Just a little bit... For some reason the animals like our hay...
Posted by buddeshepherd at 7:12 AM